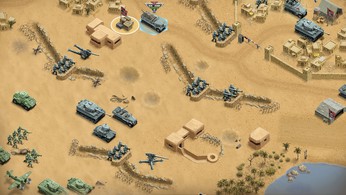 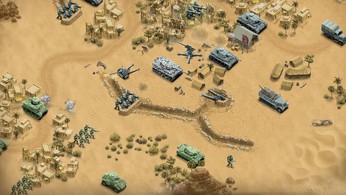 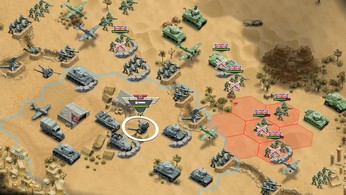 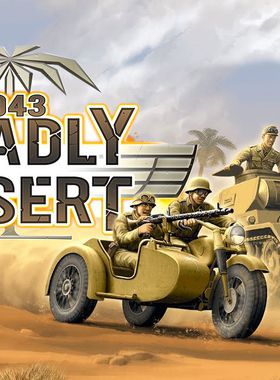 1943 – A hot, dusty wind sweeps through the camp. Scouts report of heavy Wehrmacht forces. The Desert Fox is rapidly pushing towards the western oasis. All combat-ready British troops are on high alert to fend off the invasion. At the same time, the Axis powers are preparing the assault on a vital resupply center. En route to their next battle, with heavy tanks, artillery and supply vehicles. Which side will you choose?

This is the decisive World War II battle between the Allied forces and the Axis powers! Choose your path and lead your army to victory! The right war strategy is the key to the ultimate victory! Issue orders to your officers on the battlefield. They'll motivate, inspire and strengthen the troops assigned to their command! Become the greatest general of all time and prove your tactical skills in plenty of different war campaigns! Unlock new missions, maps and scenarios!

Your tactical possibilities are nearly limitless. Fight with tanks, warplanes, infantry, paratroopers, artillery and many other powerful special forces and weaponry! Break through the enemy lines by land and air! Lead your soldiers into battle and crush your enemies on the historical battlefields of Africa! Even more new units for your tactical genius! Order devastating air strikes or command a forced march. The stakes are high, but the prize of a glorious victory awaits!

With GameGator, you are able to compare 13 deals across verified and trusted stores to find the cheapest 1943 Deadly Desert Key for a fair price. All stores currently listed have to undergo very specific testing to ensure that customer support, game deliveries, and the game keys themselves are of the highest quality. To sweeten the deal, we offer you specific discount codes, which you will not be able to find anywhere else. This allows us to beat all competitor prices and provide you with the cheapest, most trustworthy deals. If the current cheapest price of $0.68 for 1943 Deadly Desert is too high, create a price alert and we will alert you through email, SMS, or discord the moment the 1943 Deadly Desert price matches your budget.

Can I play 1943 Deadly Desert immediately after the purchase?

What store should I choose for the best 1943 Deadly Desert Deal?