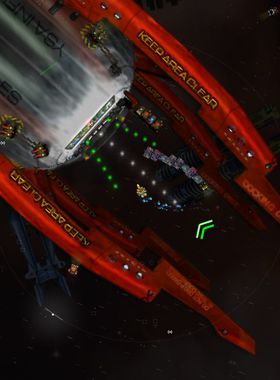 A fusion of Elite-style space exploration, frantic and fast-paced combat, and a healthy dose of Lucas Arts-style comedic adventuring, 3030 Deathwar Redux sets you free to roam the entire galaxy, after a mysterious War left planets uninhabitable and the remaining stations on quarantine lockdown. Help freewheeling space pilot John Falcon get back on his feet in a huge open world, and pilot your own course through the games dizzying array of missions, stories and features.

Its not been a good day for John. His crew has discovered a dead body, his brand new ships been impounded by the cops, and a lot of people seem unhappy with him... probably something to do with a missing cargo of gold bars.

Will you take on some local delivery jobs so you can afford a better ship. Downsize to a jetsuit and go shooting space-junk for quick money? Or focus on finding that missing gold shipment, before the local gangs and salvage teams get there first?

Meanwhile, theres that damn mechanic who sold you a stolen ship, and this mysterious Taoist group who everyone keeps talking about. Before long, John finds himself inextricably caught up in a plot of intergalactic intrigue...

* Board stations, visit the bars and talk to an array of space scum

* Ghostly derelict ships to find on your Star-Map, spacewalk into, and salvage valuables

* Large variety of fun jobs and missions, with amusing and exciting side-quests

* Diverse array of ships to buy and upgrade for Performance, Defence and Combat

* Get a fuel-scoop and refuel from the corona of a sun without frying yourself!

* Invest in a large cargo ship and go asteroid mining for metals, or haul goods between systems

* Get caught up in an irreverent, amusing and enthralling main story

3030 Deathwar was originally released in 2007. The Redux version is a completely reworked game, the result of several years of hard work, and adds an extended adventure - with more characters and content, graphical enhancements, balancing and gameplay changes, a smoother tutorial and tons of other improvements!

With GameGator, you are able to compare 2 deals across verified and trusted stores to find the cheapest 3030 Deathwar Redux Key for a fair price. All stores currently listed have to undergo very specific testing to ensure that customer support, game deliveries, and the game keys themselves are of the highest quality. To sweeten the deal, we offer you specific discount codes, which you will not be able to find anywhere else. This allows us to beat all competitor prices and provide you with the cheapest, most trustworthy deals. If the current cheapest price of $14.99 for 3030 Deathwar Redux is too high, create a price alert and we will alert you through email, SMS, or discord the moment the 3030 Deathwar Redux price matches your budget.

Can I play 3030 Deathwar Redux immediately after the purchase?

What store should I choose for the best 3030 Deathwar Redux Deal?