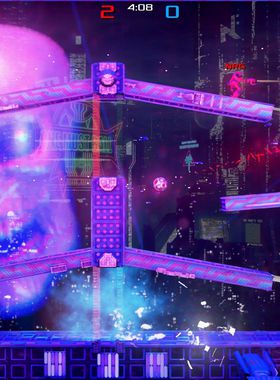 A sport with simple rules: kill suckers, catch the ball and score!

5 Minutes Rage is a 2.5D multiplayer game where two teams of robots (junkbots) clash in a battle of cannon shots to bring the ball to the goal. It features a frantic gameplay with 5 minutes matches, 2vs2 or 1vs1, in online or local mode.

An hybrid between a party game and a shooter: straightforward and fun but leaving space for the development of skills and tactics. The aesthetics mixes colorful 80s flavoured atmospheres with last generation graphics and effects, using Unreal Engine.

■ A sport with robots, lasers and a ball

■ Team up with a friend or a local player

■ In-game emojis to express your frustration

■ Cool advanced techniques: deflect projectiles and throw enemies in their own goal with the ball (humiliation!)

■ Play online to unlock customizations for your junkbot

■ Retro atmosphere, but cool Unreal Engine graphics, so that your hardware won't be wasted

■ Get praise by the Skill Skull!

Where can I buy a 5 Minutes Rage Key?

With GameGator, you are able to compare 4 deals across verified and trusted stores to find the cheapest 5 Minutes Rage Key for a fair price. All stores currently listed have to undergo very specific testing to ensure that customer support, game deliveries, and the game keys themselves are of the highest quality. To sweeten the deal, we offer you specific discount codes, which you will not be able to find anywhere else. This allows us to beat all competitor prices and provide you with the cheapest, most trustworthy deals. If the current cheapest price of $0.65 for 5 Minutes Rage is too high, create a price alert and we will alert you through email, SMS, or discord the moment the 5 Minutes Rage price matches your budget.

Can I play 5 Minutes Rage immediately after the purchase?

What store should I choose for the best 5 Minutes Rage Deal?