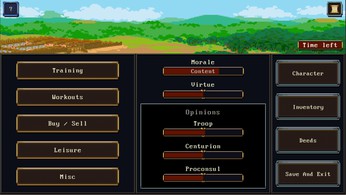 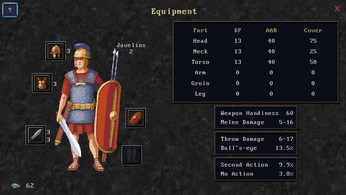 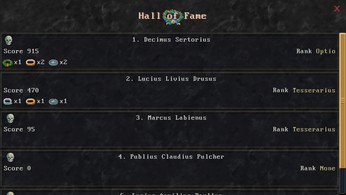 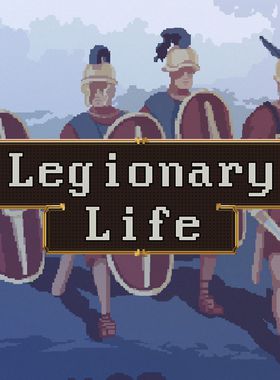 About A Legionary's Life

A Legionary's Life lets you play as a Roman soldier during the years of the Second Punic War and beyond. Rise up through the ranks and win prestigious awards or just focus on making it home in one piece; it's up to you. This is a unique single-player game with RPG elements, extensive usage of attribute and skill checks, a turn-based combat system involving many variables (including morale, reach, confined space and high ground) and a touch of roguelike features. Among them, permadeath.

If you are unfamiliar with the term, it means you'll have to start over if your character dies; but don't worry: the game is designed to be replayable and you'll see only a fraction of it in each run. Also, you'll be able to spend points on your next legionary based on how well your most successful characters performed. This game is unlike most RPGs. Your character won't be successful at everything. Challenges should be picked carefully based on your legionary's strengths and weaknesses.

In general, the game is not designed to put you in a situation where the odds are against you unless you willingly step into it. At times, you may fail to perform a task and take a mild penalty in Morale and/or Opinions (a measure of your relationships with relevant entities within the game, like your superiors and your fellow soldiers). Don't get discouraged when this happens, it is nothing more than a minor setback you can easily recover from.

Where can I buy a A Legionary's Life Key?

With GameGator, you are able to compare deals across verified and trusted stores to find the cheapest A Legionary's Life Key for a fair price. All stores currently listed have to undergo very specific testing to ensure that customer support, game deliveries, and the game keys themselves are of the highest quality. To sweeten the deal, we offer you specific discount codes, which you will not be able to find anywhere else. This allows us to beat all competitor prices and provide you with the cheapest, most trustworthy deals. If the current cheapest price of $7.13 for A Legionary's Life is too high, create a price alert and we will alert you through email, SMS, or discord the moment the A Legionary's Life price matches your budget.

Can I play A Legionary's Life immediately after the purchase?

What store should I choose for the best A Legionary's Life Deal?