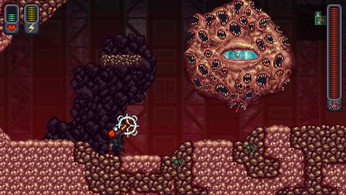 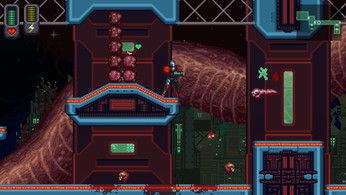 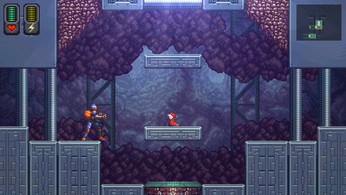 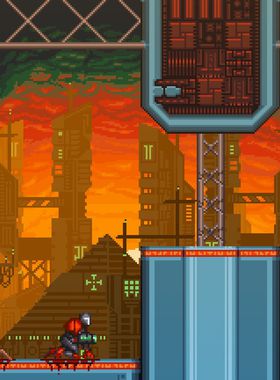 About A Robot Named Fight

A Robot Named Fight is a metroidvania roguelike focused on exploration and item collection. Its developed solely by one guy, Matt Bitner. The game is a love letter to retro classics such as Super Metroid, Contra, and Mega Man, but also draws inspiration from modern indie classics such as The Binding of Isaac.

In A Robot Named Fight you will explore a different, procedurally-generated, labyrinth every time you play. Youll discover randomized power ups that allow you to traverse obstacles and discover new areas beneath the surface of a meat infested robot city. As you delve deeper you'll discover a rich narrative conveyed through gameplay and environmental hints. Be careful though, death is forever in this roguelike metroidvania.

You will also explode a whole lot of meat beasts with your blaster arm.

Millennia of peace have passed since the mechanical gods ascended, leaving the lower order robots to cultivate the world. But something forgotten and terrible now stirs amidst the stars.

The Megabeast, a pulsating, moon-sized orb of flesh and countless eyes, mouths and reproductive organs, penetrates the stratosphere and spills forth its children unto the world. It is up to you, a lone robot, to fight this unstoppable plague of meat.

You must delve beneath the surface to retrieve the lost artifacts of war-time so that you may become fight enough to face Megabeast. Should you fail, your carcass will be added to the mountains of metal already scraping the sky.

Explore a procedurally-generated labyrinth with more than 4 billion unique runs.

Take on over 50 menacing enemies solo or with a friend via local co-op.

Discover and collect more than 60 unique items to aid you in your journey.

Adapt to a different item set every run

Fight your hardest or suffer permadeath

Use multiple save slots to avoid overwriting previous saves.

Enjoy an unreasonable amount of meat!

Where can I buy a A Robot Named Fight Key?

With GameGator, you are able to compare 3 deals across verified and trusted stores to find the cheapest A Robot Named Fight Key for a fair price. All stores currently listed have to undergo very specific testing to ensure that customer support, game deliveries, and the game keys themselves are of the highest quality. To sweeten the deal, we offer you specific discount codes, which you will not be able to find anywhere else. This allows us to beat all competitor prices and provide you with the cheapest, most trustworthy deals. If the current cheapest price of $4.23 for A Robot Named Fight is too high, create a price alert and we will alert you through email, SMS, or discord the moment the A Robot Named Fight price matches your budget.

Can I play A Robot Named Fight immediately after the purchase?

What store should I choose for the best A Robot Named Fight Deal?