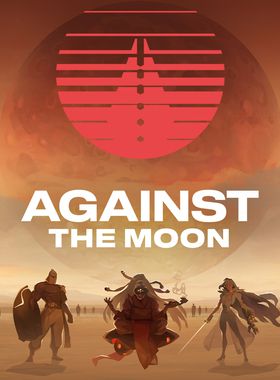 About Against The Moon

Featuring a bleak post-apocalyptic setting, Against The Moon mixes elements of popular trading card games like Slay the Spire, Hand of Fate and Talisman to create an epic strategy experience with a thrilling plot and unique visual style.

Having lost control of the planet to weird beasts of their own creation, humanity’s last survivors took refuge in an ancient citadel. Now the superhuman Ultori represent mankind’s last hope. Lead a squad of powerful Ultori to defeat the Furos, the nightmare creatures of the Moon, and restore humanity as the rightful rulers of Earth.

Craft your own deck, upgrade your cards and level up your characters to combat bizarre and dangerous opponents. Crush enemy bosses, build your forces and gather the resources you need to challenge the Moon itself!

May Great Mother Arx bless your mission. You are our only hope!

Against The Moon offers a new approach to deckbuilding: each card can evolve along two different paths, allowing you to adapt to your opponents’ strategy. Keep an eye on your energy levels, and remember: the enemy is watching your every step.

Where can I buy a Against The Moon Key?

With GameGator, you are able to compare 11 deals across verified and trusted stores to find the cheapest Against The Moon Key for a fair price. All stores currently listed have to undergo very specific testing to ensure that customer support, game deliveries, and the game keys themselves are of the highest quality. To sweeten the deal, we offer you specific discount codes, which you will not be able to find anywhere else. This allows us to beat all competitor prices and provide you with the cheapest, most trustworthy deals. If the current cheapest price of $7.72 for Against The Moon is too high, create a price alert and we will alert you through email, SMS, or discord the moment the Against The Moon price matches your budget.

Can I play Against The Moon immediately after the purchase?

What store should I choose for the best Against The Moon Deal?