Age of Empires 2 HD: Rise of the Rajas 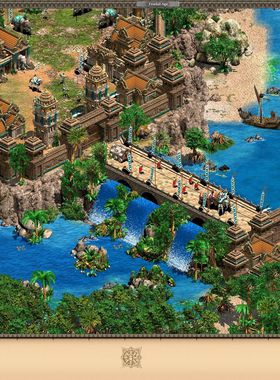 Age of Empires 2 HD: Rise of the Rajas

About Age of Empires 2 HD: Rise of the Rajas

Welcome to Age of Empires II HD: The Rise of the Rajas; the third new official expansion for the Age of Empires II universe in over 17 years. Challenge friends with four additional civilizations, new units, technologies, and build your empire on both water and land. Guide history's greatest heroes in Southeast Asia through four additional campaigns and conquer your foes with mighty hordes of elephants under your command!

Burmese – Assemble the largest empire in the history of Southeast Asia through a legion of Battle Elephants that can demolish the most powerful of defenses. The Burmese unique unit is the Arambai, a ranged cavalry unit with a deadly but low accuracy attack.

Khmer – Construct the largest religious monument in the world and amass an immortal army of devastating siege weapons. The Khmer unique unit is the Ballista Elephant, a mounted scorpion that can be upgraded to fire two bolts simultaneously.

Malay – Conquer Southeast Asia with the vast island empire of Malay and upgrade your docks to harbours which can shoot arrows. The Malay unique unit is the Karambit Warrior, an extremely cheap infantry unit that can quickly overwhelm its foes.

Vietnamese – Lead your people to independence and wage guerilla warfare with an extremely powerful arsenal of ranged units. The Vietnamese unique unit is the Rattan Archer, a heavily-armored ranged unit that is effectively impervious to enemy archer attacks.

Gajah Mada: On the island of Java, a new power is rising. Gajah Mada, prime minister of Majapahit, conspires to build an empire to rule the waves and islands of the Archipelago. Will he be able to balance his unquestioned loyalty to the king with his growing ambitions?

Suryavarman I: It is the early 11th century and the Khmer Empire is in turmoil, torn apart by competing factions and surrounded by hostile neighbors. Only one prince, Suryavarman, has the courage and cunning to defeat his rivals and restore the Khmer to their former glory. Seizing the throne, however, is just the first of many tasks. Will Suryavarman muster the strength to expand his domain, overcome adversity, and create a timeless legacy as the king who attained Nirvana?

Bayinnaung: A warrior king seeks to unite a divided land. But when he is betrayed, only his devoted servant can continue his legacy. Can a mere commoner ascend the Burmese throne and build the largest empire in Southeast Asian history?

Lê Lợi: When a civil war plunged Dai Viet into chaos, the Ming Emperor intervened and seized control. Now, the only hope for freedom from oppression lies with one man: a minor noble named Le Loi. Will he be able to unite feuding factions, defeat the Chinese, and regain Vietnamese independence?

Imperial Skirmisher: The long-awaited upgrade to the iconic Elite Skirmisher unit, the upgrade is available to the Vietnamese and all of its teammates.

Land meets the sea in The Rise of the Rajas! Alongside massive rainforests, treacherous beaches, the new mangrove forests and shallows provide a whole new playstyle. The new amphibious terrain can be built on and both land units and ships can pass through it. This new terrain type is featured on each of the five new random maps.

Where can I buy a Age of Empires 2 HD: Rise of the Rajas Key?

With GameGator, you are able to compare 5 deals across verified and trusted stores to find the cheapest Age of Empires 2 HD: Rise of the Rajas Key for a fair price. All stores currently listed have to undergo very specific testing to ensure that customer support, game deliveries, and the game keys themselves are of the highest quality. To sweeten the deal, we offer you specific discount codes, which you will not be able to find anywhere else. This allows us to beat all competitor prices and provide you with the cheapest, most trustworthy deals. If the current cheapest price of $10.56 for Age of Empires 2 HD: Rise of the Rajas is too high, create a price alert and we will alert you through email, SMS, or discord the moment the Age of Empires 2 HD: Rise of the Rajas price matches your budget.

Can I play Age of Empires 2 HD: Rise of the Rajas immediately after the purchase?

What store should I choose for the best Age of Empires 2 HD: Rise of the Rajas Deal?