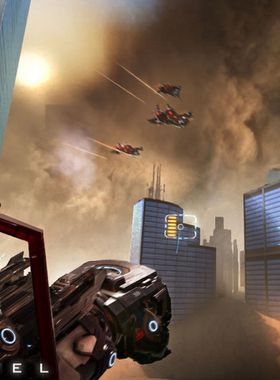 Archangel Hellfire is the unholy union of god-like mech weaponry and infernal team deathmatch gameplay. Pilot massive weapons of destruction, armed to the teeth, and war on post-apocalyptic lands in this free-roaming shooter. Need a break from PvP? Team up against HUMNX in the Coop Mech Assault mode (1-4 P) or explore life before all-out war ignited and battle waves of enemies in the award winning solo campaign. Ready, pilots? Enlist and get into a mech today!

6 Special Abilities: Singularity Beam, Invisibility, Death from Above and more...

Tactile cockpit controls: Roam free, and fight to win with full control of your mech

Where can I buy a Archangel: Hellfire Key?

With GameGator, you are able to compare deals across verified and trusted stores to find the cheapest Archangel: Hellfire Key for a fair price. All stores currently listed have to undergo very specific testing to ensure that customer support, game deliveries, and the game keys themselves are of the highest quality. To sweeten the deal, we offer you specific discount codes, which you will not be able to find anywhere else. This allows us to beat all competitor prices and provide you with the cheapest, most trustworthy deals. If the current cheapest price of $2.03 for Archangel: Hellfire is too high, create a price alert and we will alert you through email, SMS, or discord the moment the Archangel: Hellfire price matches your budget.

Can I play Archangel: Hellfire immediately after the purchase?

What store should I choose for the best Archangel: Hellfire Deal?