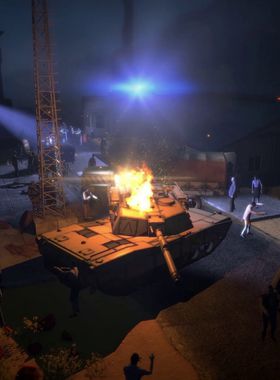 Welcome to the final days before the zombie apocalypse! Arizona Sunshine – Dead Man DLC drops you at an infested US missile base where you lead a frantic attempt to contain the expanding zombie outbreak. Playing as Dockson, a US Army Special Forces corporal, the faith of the American Southwest rests in your hands as you fight to launch a nuclear-warhead loaded missile vital to stopping the spread of zombies. In the close-quarters of the missile silo, even the most veteran of Arizona Sunshine survivors need to stay alert to overcome the undead onslaught and complete the mission.

An all-new campaign mission taking place before the events of Arizona Sunshine
Online co-op functionality for up to two players
Support for two-handed mode
A range of difficulty degrees including the insane Apocalyptic Mode!
Six new Steam achievements spread across an infested missile silo
Three new weapons: A fully automatic submachine gun, a two-handed shotgun and a tactical handgun
New character customization options that carry over to the base game

Where can I buy a Arizona Sunshine - Dead Man Key?

With GameGator, you are able to compare 4 deals across verified and trusted stores to find the cheapest Arizona Sunshine - Dead Man Key for a fair price. All stores currently listed have to undergo very specific testing to ensure that customer support, game deliveries, and the game keys themselves are of the highest quality. To sweeten the deal, we offer you specific discount codes, which you will not be able to find anywhere else. This allows us to beat all competitor prices and provide you with the cheapest, most trustworthy deals. If the current cheapest price of $1.10 for Arizona Sunshine - Dead Man is too high, create a price alert and we will alert you through email, SMS, or discord the moment the Arizona Sunshine - Dead Man price matches your budget.

Can I play Arizona Sunshine - Dead Man immediately after the purchase?

What store should I choose for the best Arizona Sunshine - Dead Man Deal?