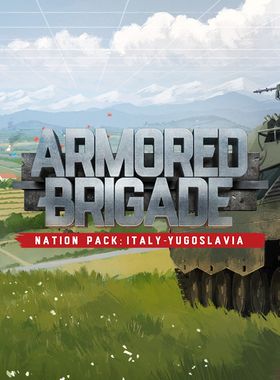 Following World War II, Italy has struggled with negative memories of defeat and mediocre performances, long labouring under the stigma of failure and incompetence. Merely a remnant of a past to be forgotten, war was expressly rejected in the Constitution, but the creation of NATO meant that the Italian Armed Forces were quickly reorganised and expanded within a totally different international framework than before. Preparing for a feared invasion from the east, likely via Yugoslavia, Italy played an important role in the Mediterranean. Still, the country's strategic culture, a mixture of realpolitik and pacifist tendencies, severely impacted it's military policies.

The Italian Army at first glance might seem under-equipped compared to its NATO peers. However, it should be noted that they were supposed to defend a well-fortified, and mostly rugged mountainous terrain on their eastern border. Moreover, quality of units varied significantly across the Army. Some were better trained or better equipped, for example the famous Alpini mountain troops or selected armoured and mechanised brigades. Nevertheless, a player might still feel being under-gunned or lacking in certain aspects, so his armoured, mechanized or infantry force should be always reinforced by strong support assets. This also means a great care should be given to mobility, flanking engagements, and emphasizing maximum use of terrain cover; providing for a challenging and dynamic playstyle.

Where can I buy a Armored Brigade Nation Pack: Italy - Yugoslavia Key?

With GameGator, you are able to compare 3 deals across verified and trusted stores to find the cheapest Armored Brigade Nation Pack: Italy - Yugoslavia Key for a fair price. All stores currently listed have to undergo very specific testing to ensure that customer support, game deliveries, and the game keys themselves are of the highest quality. To sweeten the deal, we offer you specific discount codes, which you will not be able to find anywhere else. This allows us to beat all competitor prices and provide you with the cheapest, most trustworthy deals. If the current cheapest price of $6.27 for Armored Brigade Nation Pack: Italy - Yugoslavia is too high, create a price alert and we will alert you through email, SMS, or discord the moment the Armored Brigade Nation Pack: Italy - Yugoslavia price matches your budget.

Can I play Armored Brigade Nation Pack: Italy - Yugoslavia immediately after the purchase?

What store should I choose for the best Armored Brigade Nation Pack: Italy - Yugoslavia Deal?