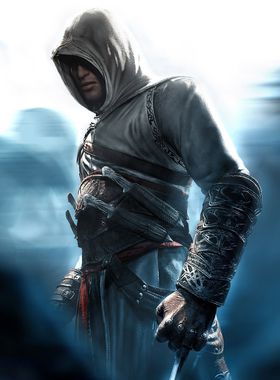 In the action-adventure game "Assassin's Creed", American researchers have developed a device with which you can send a test person on a journey through time using genetic information. The subject then finds himself in one of his ancestors and actively relives his history. The rather inconspicuous and defensive Desmond Miles is such a test person and is sent to one of his ancestors named "Altair", a dangerous assassin at the time of the crusades in the 11th century. Assassins who belonged to a Shiite sect and were trained to commit political assassinations were skilled dagger fighters. The researchers want to learn more about Altair, and, as expected, the player takes on the role of this dangerous assassin.

Altair has violated the principles of the assassin on a mission and willfully endangered two of his brethren. They paid for it with their lives, and to regain the favor of the cult leaders; he must complete the training as an Assassin again. His mission takes him through Damascus and over the lonely country road to Jerusalem. In all cities, he has a contact person who provides him with orders. Mostly he first has to explore the city and, for example, pick up rumors that the citizens are listening to in the alleys of the town. Only later does he get a target person whom he has to liquidate. The player can get more information about people he meets by stopping and letting Altair create a vision. In this way, he can find out whether he is dealing with civilians, allies, or aggressive enemies. But as soon as he moves, the information fades.

Where can I buy a Assassin's Creed Key?

With GameGator, you are able to compare 6 deals across verified and trusted stores to find the cheapest Assassin's Creed Key for a fair price. All stores currently listed have to undergo very specific testing to ensure that customer support, game deliveries, and the game keys themselves are of the highest quality. To sweeten the deal, we offer you specific discount codes, which you will not be able to find anywhere else. This allows us to beat all competitor prices and provide you with the cheapest, most trustworthy deals. If the current cheapest price of $3.08 for Assassin's Creed is too high, create a price alert and we will alert you through email, SMS, or discord the moment the Assassin's Creed price matches your budget.

Can I play Assassin's Creed immediately after the purchase?

What store should I choose for the best Assassin's Creed Deal?