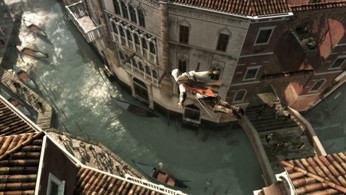 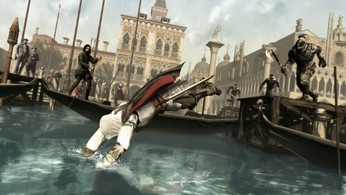 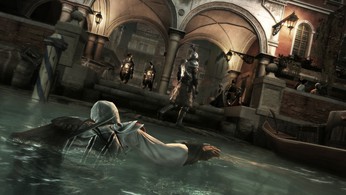 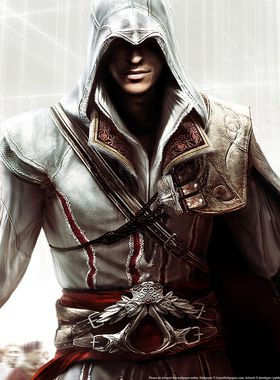 As in the first part, there are also two levels of action in "Assassin's Creed 2": The story begins with the protagonist Desmond Miles, who can live through the adventures of an ancestor using a machine, the animus. In "Assassin's Creed 2" his alter ego is the Italian Ezio Auditore de Firenze at the time of the Renaissance. The eternal battle between Templars and Assassins leads Desmond alias Ezio this time to 15th century Florence. The story begins with the birth of our hero, who, in the form of an infant, can be made to wriggle and scream at the touch of a button. As a young Ezio, a short time later, you go on forays through Florence, where the basics of control are taught, for example, in a race over the roofs of the city. Eventually, a first tangible encounter with members of the rival Pazzi family takes place, which later in the game brings Ezio's father and his two brothers to the gallows through a betrayal. We can only witness the execution and flee to our Uncle Mario's family estate in Monterrigioni after we have been discovered. Here we get first hints about the Assassin past of our family, get our armor and weapons, and are instructed in combat by uncle Mario. Equipped like this, the player sets out to track down the conspirators and avenge the murder of the relatives. After the first act of revenge, it quickly becomes clear that the conspiracy is far greater than it first appeared, and the first clues to the Order of the Temple are revealed. In addition to the historic locations, the player also encounters numerous historical figures, such as the companion Leonardo da Vinci, who provides advice and assistance as well as his inventions (e.g., the flying machine). Ezio now assassinates himself on his journey from conspirator to conspirator and arrives at historically recreated places in Tuscany, Venice, or later also Rome.

Where can I buy a Assassin's Creed 2 Deluxe Edition Key?

With GameGator, you are able to compare 5 deals across verified and trusted stores to find the cheapest Assassin's Creed 2 Key for a fair price. All stores currently listed have to undergo very specific testing to ensure that customer support, game deliveries, and the game keys themselves are of the highest quality. To sweeten the deal, we offer you specific discount codes, which you will not be able to find anywhere else. This allows us to beat all competitor prices and provide you with the cheapest, most trustworthy deals. If the current cheapest price of $6.49 for Assassin's Creed 2 is too high, create a price alert and we will alert you through email, SMS, or discord the moment the Assassin's Creed 2 price matches your budget.

Can I play Assassin's Creed 2 Deluxe Edition immediately after the purchase?

What store should I choose for the best Assassin's Creed 2 Deluxe Edition Deal?