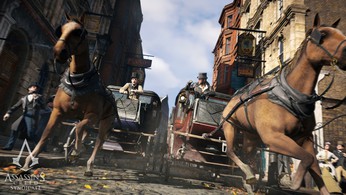 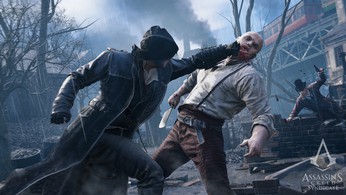 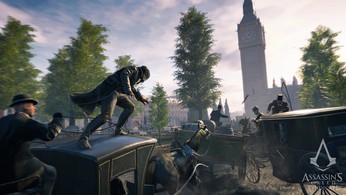 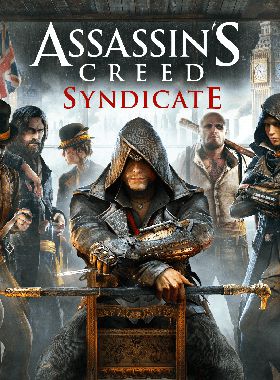 Assassin's Creed is a game series from Ubisoft, in which science fiction and history are mixed. In the simulated past of Assassin's Creed Syndicate, the player takes on the role of Evie and Jacob Frye in the times of the industrial revolution. By chance, the two siblings learn that a "piece of Eden" is hidden in London. In an open game world, the players are allowed to climb walls as they please, to fulfill orders or search for collectibles. The main missions are often about killing a human target. Also, there is a unique feature in each part of the series. While in Assassin's Creed 4: Black Flagships could be steered; there are horse-drawn carriages in this part. Ships and boats are on the Thames, but cannot be driven. Assassin's Creed always walks a fine line between fact and fiction. The truth is that the game features famous personalities of their time, such as Darwin, Marx, and Bell. Social problems, such as child labor, are also addressed in the game. But fiction is that Darwin is chasing after legendary figures in London or that horse-drawn carriages can race through lanterns without scratching. For younger players, it could lead to a mixture of reality and fiction, because the border between the two "realities" is quite fluid in the game. While the predecessors of the game tried to create a world in grey areas, the current title is divided into black and white or good and evil. The Templars are evil, and the female and male Assassins are good. The division is clearly defined. A reflection on what happened is not intended here. So it is conveyed that every action is justified as long as a goal is achieved. Few improvements and many problems make Assassin's Creed: Syndicate an Assassin's Creed in minimum form. Fans who want to have played every game of the Assassin's Creed series should watch it and enjoy the little rays of hope. With the fan glasses on, the mistakes of the game should not weigh too heavily. Newcomers should first watch the other games of the series.

Where can I buy a Assassin's Creed Syndicate Special Edition Key?

With GameGator, you are able to compare 9 deals across verified and trusted stores to find the cheapest Assassin's Creed Syndicate Key for a fair price. All stores currently listed have to undergo very specific testing to ensure that customer support, game deliveries, and the game keys themselves are of the highest quality. To sweeten the deal, we offer you specific discount codes, which you will not be able to find anywhere else. This allows us to beat all competitor prices and provide you with the cheapest, most trustworthy deals. If the current cheapest price of $6.83 for Assassin's Creed Syndicate is too high, create a price alert and we will alert you through email, SMS, or discord the moment the Assassin's Creed Syndicate price matches your budget.

Can I play Assassin's Creed Syndicate Special Edition immediately after the purchase?

What store should I choose for the best Assassin's Creed Syndicate Special Edition Deal?

There are many details that you might want to go through before settling on the deal of your choosing. If you are looking for a special Edition, such as Gold Edition or Special Edition, you can select these in our menu. When it comes to the actual stores, we made sure that you will never get overcharged/neglected. As we care about your satisfaction, we like to ensure that all deals are legitimate, reliable, and foolproof. On top of that, we make sure all stores affiliated with us have proper refund processes and guarantees and are backed by a competent team to ensure that absolutely nothing will go wrong.