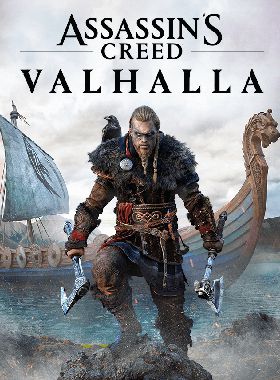 Assassin's Creed Valhalla is an action role-playing game placing great emphasis on individual player decision-making and exploration. The game world not only offers many challenges, but also numerous breathtaking, freely explorable, landscapes and unique characters with unforgettable stories. Players can customise their character's hairstyle, tattoos, war paint, weapons, and equipment. In addition, players can switch between male and female Eivor at any time.

Every political alliance, decision in battle, and dialogue option can influence the world of Assassin's Creed Valhalla. Players must thus make well-considered decisions to protect their home and the future of their clan. Developed by Ubisoft Montreal, Assassin's Creed Valhalla invites players to embark on an epic adventure in which they will discover the story of Eivor, a dreaded Viking who grew up with legends of battles and glory. In a stirring Viking experience, players explore a mysterious, but beautiful open game world set against the brutal backdrop of England in its darkest age. Thanks to numerous new features, players can plunder and pillage, let their settlements grow, and steadily expand their political power to earn a place among the gods of Valhalla.

Grown up among Vikings and raised to go on fearless warlike raids, you lead your clan from the icy wastelands of Norway to a new home on the fertile soil of England in the ninth century. Viking England is a patchwork of small empires and constantly warring kings. Behind all this chaos is a rich and untamed land waiting for someone to conquer it. Will it be you?

Where can I buy a Assassin's Creed Valhalla Key?

With GameGator, you are able to compare 44 deals across verified and trusted stores to find the cheapest Assassin's Creed Valhalla Key for a fair price. All stores currently listed have to undergo very specific testing to ensure that customer support, game deliveries, and the game keys themselves are of the highest quality. To sweeten the deal, we offer you specific discount codes, which you will not be able to find anywhere else. This allows us to beat all competitor prices and provide you with the cheapest, most trustworthy deals. If the current cheapest price of $19.05 for Assassin's Creed Valhalla is too high, create a price alert and we will alert you through email, SMS, or discord the moment the Assassin's Creed Valhalla price matches your budget.

Can I play Assassin's Creed Valhalla immediately after the purchase?

What store should I choose for the best Assassin's Creed Valhalla Deal?