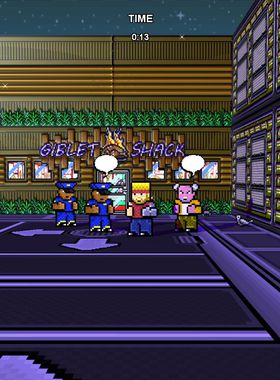 Atomic Adam: Episode 1 is a gaming experience packed to the brim with nostalgic retro action! Fight, fly and shoot your way through a fully 3D world filled with giant rats, grey aliens, UFOs, boss battles and insane combat, all with an art style inspired by the retro action games of yesterday. As rock star Atomic Adam, youll battle your way through Delta City defeating bosses on your hunt for the infamous Deathbot. None is more mysterious than Deathbot who traveled to Delta City with his army to usurp the city and its resources. Atomic Adam is tasked with finding Mayor Lamowitzs wife who was kidnapped by Deathbot and now held hostage. Deathbot now demands Mayor Lamowitz to resign or he will never see his wife again!

Do you have what it takes to save Delta City before it falls in to the hands of Deathbot? Atomic Adam represents a new story in the Radical Heroes Universe. Complete with a new hero, game play mechanics, story and action all in the retro inspired universe of Radical Heroes.

An action packed pick up and play for all ages!

Explore a city filled to the brim with Insane enemies and rewarding secrets and Achievements!

Tons of diverse weapons and pickups keep the mayhem fresh!

3 massive areas to unlock and explore!

Unique combat system strings your moves automatically as you mash the kick and punch buttons!

Where can I buy a Atomic Adam Key?

With GameGator, you are able to compare deals across verified and trusted stores to find the cheapest Atomic Adam Key for a fair price. All stores currently listed have to undergo very specific testing to ensure that customer support, game deliveries, and the game keys themselves are of the highest quality. To sweeten the deal, we offer you specific discount codes, which you will not be able to find anywhere else. This allows us to beat all competitor prices and provide you with the cheapest, most trustworthy deals. If the current cheapest price of $0.36 for Atomic Adam is too high, create a price alert and we will alert you through email, SMS, or discord the moment the Atomic Adam price matches your budget.

Can I play Atomic Adam immediately after the purchase?

What store should I choose for the best Atomic Adam Deal?