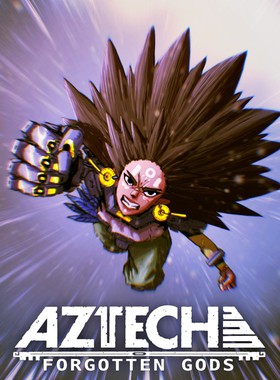 Aztech Forgotten Gods is the cyber - stone action - adventure following Achtli, a young woman who battles the colossal Forgotten Gods. To uncover the truth behind her far - future Mesoamerican metropolis, she'll have to turn the Gods' power against them, as she soars through the city with power and grace using an ancient artifact, remnant of a time long forgotten.

Exhilarating verticality and mobility: Launch yourself into action with mysterious technology that will allow you to uncover ancient secrets in a city ripe for exploration.

A unique futuristic Mesoamerican setting: Explore a modern Aztec city that has thrived for centuries as a stone metropolis, technologically advanced, yet heavily rooted in ancient tradition.

Massive bosses: Face off in electrifying battles against gigantic creatures resembling deities from the Aztec pantheon.

Deeply involved narrative: Join Achtli in an emotional journey, filled with twists, turns and high - octane action, as she fights to protect her city from the Forgotten Gods.

Refreshing perspective on the Aztec Mythology: Dive into a fascinating Mesoamerican - inspired world and see Aztec lore like you have never seen it before.

Where can I buy a Aztech Forgotten Gods Key?

With GameGator, you are able to compare deals across verified and trusted stores to find the cheapest Aztech Forgotten Gods Key for a fair price. All stores currently listed have to undergo very specific testing to ensure that customer support, game deliveries, and the game keys themselves are of the highest quality. To sweeten the deal, we offer you specific discount codes, which you will not be able to find anywhere else. This allows us to beat all competitor prices and provide you with the cheapest, most trustworthy deals. If the current cheapest price for Aztech Forgotten Gods is too high, create a price alert and we will alert you through email, SMS, or discord the moment the Aztech Forgotten Gods price matches your budget.

Can I play Aztech Forgotten Gods immediately after the purchase?

What store should I choose for the best Aztech Forgotten Gods Deal?