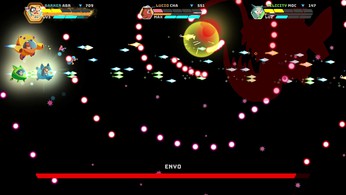 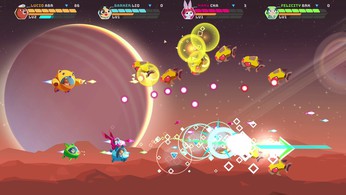 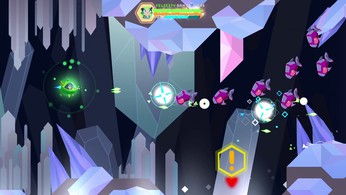 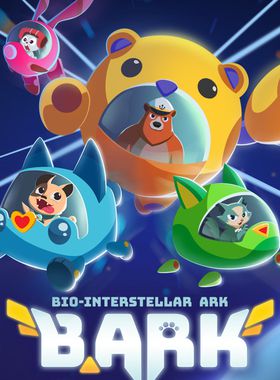 Save our planet from the cybernetic fish armada, Dark Tide, who are spreading their reign of terror into outer space! Pilot a team of four-legged heroes as they fight to free their friends and bring peace to the Solar System.

Each pilot has their own unique gameplay style to fit their fuzzy personality in up to 4-player couch co-op. Hop in a mech and play as Barker the Dog whose ship "Wishbone" recruits buddies for extra firepower, Felicity the Cat and her spread shot ship "Payback," Lucio the Bear and his helpful shield ship "Mossy Pig II" and Marv the Rabbit in his ship "Lucky 7" with homing bullets.

Overcome overwhelming odds by fusing mech abilities to create a powerful hybrid of their strengths in co-op mode. Be ready for any situation with Barker's super attack "Bullet Stream". Tear through enemies with Felicity's "Cat's Gaze" that unleashes a barrage of bullets. Come to the aid of injured comrades with Lucio the Bear's expanding shield "Bear Hug" that protects nearby teammates from incoming bullets. Hop through enemy fire with Marv the Rabbit's time-slowing super attack "Fearful Focus."

Test your might against the formidable bosses of each planet. Take on Spike the Narwhal, Vic the Sea Snake, and a whole slew of marine bad guys equipped with challenging attack patterns that increase in difficulty.

Work as a team, but be sure to grab the most plutonium from defeated enemies to see how your high-score ranks against your fellow teammates.

Can you defeat the Dark Tide before their deep-sea forces completely take over the Solar System?! Squad up and fight to take back the Earth in B. ARK!

Where can I buy a B.ARK Key?

With GameGator, you are able to compare 2 deals across verified and trusted stores to find the cheapest B.ARK Key for a fair price. All stores currently listed have to undergo very specific testing to ensure that customer support, game deliveries, and the game keys themselves are of the highest quality. To sweeten the deal, we offer you specific discount codes, which you will not be able to find anywhere else. This allows us to beat all competitor prices and provide you with the cheapest, most trustworthy deals. If the current cheapest price of $9.99 for B.ARK is too high, create a price alert and we will alert you through email, SMS, or discord the moment the B.ARK price matches your budget.

Can I play B.ARK immediately after the purchase?

What store should I choose for the best B.ARK Deal?