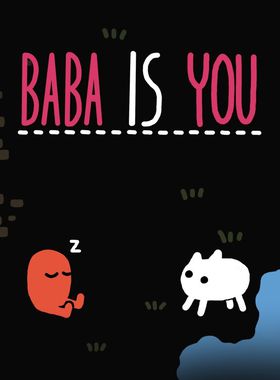 About Baba Is You

The best puzzle games provide pure fun when you finally reveal their secrets and that's what Baba Is You feels like. The idea goes way back to Arvi Hempuli Teikari, who first demonstrated his idea for the game at the Nordic Game Jam in 2017. The mechanics of the game are relatively simple, but Hempuli quickly turns them into very complex puzzles. Each level provides new game rules and everything is defined by blocks, or rather words, on the screen. You are often provided with the sentence Baba Is You, which is also the first rule - you play as Baba. Quickly add new variations that affect your playing possibilities and change rules by moving one of the word blocks. For example, Wall is Stop, will make walls stop in their tracks.

Where can I buy a Baba Is You Key?

With GameGator, you are able to compare 12 deals across verified and trusted stores to find the cheapest Baba Is You Key for a fair price. All stores currently listed have to undergo very specific testing to ensure that customer support, game deliveries, and the game keys themselves are of the highest quality. To sweeten the deal, we offer you specific discount codes, which you will not be able to find anywhere else. This allows us to beat all competitor prices and provide you with the cheapest, most trustworthy deals. If the current cheapest price of $8.85 for Baba Is You is too high, create a price alert and we will alert you through email, SMS, or discord the moment the Baba Is You price matches your budget.

Can I play Baba Is You immediately after the purchase?

What store should I choose for the best Baba Is You Deal?