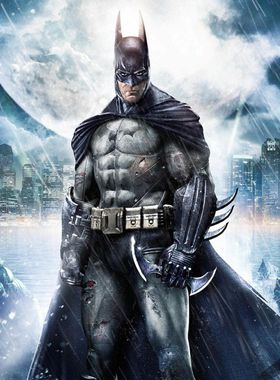 About Batman: Arkham Asylum Game of the Year Edition

Arkham Asylum was first released in 1989 and is still the most successful graphic novel ever, with half a million copies sold. The comic, which like the game, is explicitly aimed at adult readers, shows a doubter confronted with his fears and thus creates a new psychodrama of the dark hero Batman. The game starts with the admission of Batman's arch-enemy Joker to the high-security wing of the psychiatric hospital Arkham Asylum. In an extended sequence, the way leads thereby by a large part of the institution, past many hostile inmates. In this phase of the game, the interaction possibilities of the player, who controls the figure of the Batman throughout the game, are limited to accompanying the Joker. However, the Joker frees himself from his bonds deep inside the asylum and leaves Batman surrounded by criminals. It quickly becomes clear that the Joker's arrest was part of a plan that lured Batman into a trap. Hundreds of Joker's loyal cronies have been transferred to the asylum and are now gradually taking control of the institution. Batman becomes the Joker's pawn in the game, sending both his cronies and selected villains after him. Batman is trapped in a bizarre play, and the player takes control to free him and his allies from this situation. Batman is controlled from the 3rd person perspective. If Batman encounters enemies, he has the opportunity to eliminate them in direct fistfighting. Gradually, however, he is given more and more opportunities to get rid of the enemy hordes more inconspicuously. He can crouch on a ledge and pull opponents up to him with a grappling hook or stun opponents with a kind of boomerang.

Where can I buy a Batman: Arkham Asylum Game of the Year Edition Key?

With GameGator, you are able to compare 16 deals across verified and trusted stores to find the cheapest Batman: Arkham Asylum Key for a fair price. All stores currently listed have to undergo very specific testing to ensure that customer support, game deliveries, and the game keys themselves are of the highest quality. To sweeten the deal, we offer you specific discount codes, which you will not be able to find anywhere else. This allows us to beat all competitor prices and provide you with the cheapest, most trustworthy deals. If the current cheapest price of $2.20 for Batman: Arkham Asylum is too high, create a price alert and we will alert you through email, SMS, or discord the moment the Batman: Arkham Asylum price matches your budget.

Can I play Batman: Arkham Asylum Game of the Year Edition immediately after the purchase?

What store should I choose for the best Batman: Arkham Asylum Game of the Year Edition Deal?