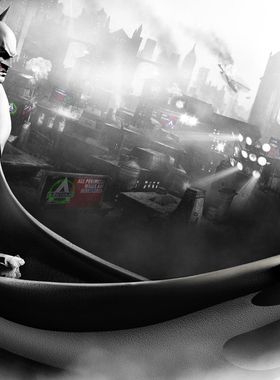 The "Dark Knight" is back, and even though he is now trying for the second time to save his beloved city from villains of all color, he has done an excellent job because the sequel to the popular game Arkham Asylum (2009) is also really impressive! When Batman destroyed large areas of the Arkham Asylum asylum in the first part of the series, a new home for the criminals, villains, hoodlums and cutthroats had to be found. So it's fitting that the former director of the asylum, Qunicy Sharp, is now the mayor of Gotham and was able to implement his latest crime-fighting idea: ...of turning an entire city block into a prison. At the beginning of the game, we see Bruce Wayne outside the city walls, giving a speech on the abolition of Arkham City, and then he is kidnapped. It quickly becomes clear that the Arkham City experiment has gone badly wrong, and the prison is about to overflow because that's precisely where Bruce Wayne alias Batman finds himself again and meets old acquaintances. First and foremost, the mad scientist Hugo Strange, who not only informs Batman that he has revealed his secret identity but also tells him that he will meet his end in Arkham City. Thus begins the thrilling adventure of the "Dark Knight" who suddenly finds himself locked up with his arch enemies.

Where can I buy a Batman: Arkham City Key?

With GameGator, you are able to compare 22 deals across verified and trusted stores to find the cheapest Batman: Arkham City Key for a fair price. All stores currently listed have to undergo very specific testing to ensure that customer support, game deliveries, and the game keys themselves are of the highest quality. To sweeten the deal, we offer you specific discount codes, which you will not be able to find anywhere else. This allows us to beat all competitor prices and provide you with the cheapest, most trustworthy deals. If the current cheapest price of $2.03 for Batman: Arkham City is too high, create a price alert and we will alert you through email, SMS, or discord the moment the Batman: Arkham City price matches your budget.

Can I play Batman: Arkham City immediately after the purchase?

What store should I choose for the best Batman: Arkham City Deal?