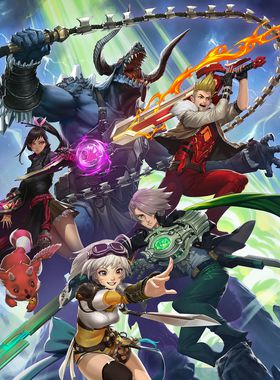 Monsters from space trapped the world's greatest heroes in technomagic crystal. Now it's up to you to assemble the ultimate team of super warriors and take back your planet - one break at a time - in this cartoon-inspired, Hero Collector RPG built as a passion project by a small team at Epic Games.

Monsters have infested every corner of the kingdom. Explore over 1000 dungeons across volcanoes, forests, glaciers, and more. Unleash massive attacks and special abilities to take down bosses and smash through legions of monsters. With the Battle Pass, Skybreaker Quests, and the Hero Store, you have the power to build the team you want. Collect an arsenal of powerful heroes ready to fight to save the world.

Where can I buy a Battle Breakers Key?

With GameGator, you are able to compare deals across verified and trusted stores to find the cheapest Battle Breakers Key for a fair price. All stores currently listed have to undergo very specific testing to ensure that customer support, game deliveries, and the game keys themselves are of the highest quality. To sweeten the deal, we offer you specific discount codes, which you will not be able to find anywhere else. This allows us to beat all competitor prices and provide you with the cheapest, most trustworthy deals. If the current cheapest price for Battle Breakers is too high, create a price alert and we will alert you through email, SMS, or discord the moment the Battle Breakers price matches your budget.

Can I play Battle Breakers immediately after the purchase?

What store should I choose for the best Battle Breakers Deal?