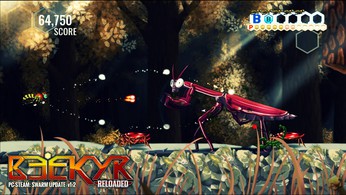 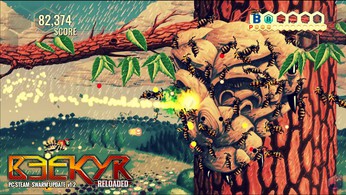 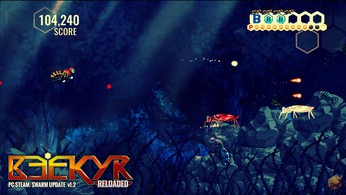 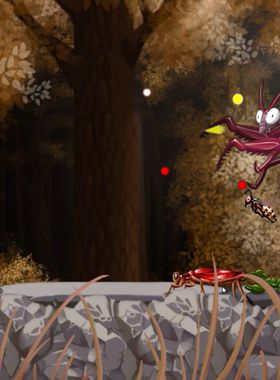 Beekyr Reloaded is an hardcore cuteem up game (shootem up with bees). The game breaks molds, moving away from the typical STG game, avoiding the space theme mixing vertical and horizontal scrolling stages with fun game mechanics. Each stage is very different from the previous: one level we could be fighting poisonous scorpions, another defending the hive collecting pollen, dodging bee-eaters, raiding dark caves protected by the most evil of wasps: Hornets.

Mold-breaking theme: Based in the treacherous world of insects.

Enormous re-playability: 4 different stage combinations that might offer from 18 to 29 stages. Depending on game events / difficulty mode

Novice: (19 Stages)Learn how to play a shootem up game (a.k.a shmup) and get ready for the real action.

Arcade: (25 Stages)Play the game at its original difficulty designed to have you playing for hours to reach a total completed game.

Bullet hell: (28 Stages)Play the game similar to a bullet hell game, plus some extra levels.

Expert: (28 Stages)Play the game harder and with some extra levels.

Elite: (18 Stages)Play the game even harder, beat the game and receive at home a reward from Kaleidogames if you are one of the first few to accomplish it.

Where can I buy a Beekyr Reloaded Key?

With GameGator, you are able to compare 2 deals across verified and trusted stores to find the cheapest Beekyr Reloaded Key for a fair price. All stores currently listed have to undergo very specific testing to ensure that customer support, game deliveries, and the game keys themselves are of the highest quality. To sweeten the deal, we offer you specific discount codes, which you will not be able to find anywhere else. This allows us to beat all competitor prices and provide you with the cheapest, most trustworthy deals. If the current cheapest price of $9.99 for Beekyr Reloaded is too high, create a price alert and we will alert you through email, SMS, or discord the moment the Beekyr Reloaded price matches your budget.

Can I play Beekyr Reloaded immediately after the purchase?

What store should I choose for the best Beekyr Reloaded Deal?