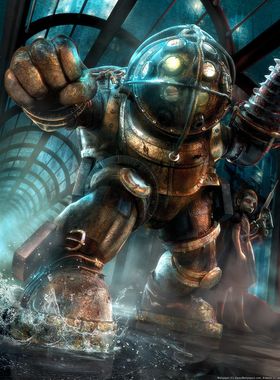 "Bioshock" is the indirect third part of the award-winning "System Shock" series. The first part of the series appeared in 1991, the second eight years later. In terms of content, the action game is about the conflict with a power-obsessed artificial intelligence called "Shodan". But this is not the extraordinary achievement that made "System Shock" one of the cult titles of its time. Instead, it is how the game for the first time cleverly combines elements from previously wholly different genres, and in this way, has contributed significantly to the development of modern computer games. For the first time in the history of computer games, "System Shock" combined extensive role-playing elements, such as the development of your character skills, with the genre of the previously purely action-oriented first-person shooter. But "System Shock" also technically paved new paths. First implementations of a game physics, which lets objects sink to the ground correctly when thrown by the player, was a groundbreaking innovation in 1991. Due to the incredibly dense and sinister story, away from the usual fantastic world concepts, "System Shock" still manages to entertain a large fan community after 16 years. They even created a graphically revised version of the second part within the framework of a fan project.

With the name alone, the developers made it clear that they wanted to break new ground with "Bioshock" and not just produce the third part of an already successful game series. Similar to the classic "Half-life", the player is suddenly caught up in the unusual events of the game's history during an everyday process. The protagonist's plane crashes during an Atlantic crossing in the 1960s. He saves himself on a mysterious island. Here it finds a diving bell in a tower. On the following dive, which takes the player to the actual start of the game, he gets his first glimpse of the magnificent underwater world called Rapture. Already the first encounter with a resident of Rapture makes it clear what it's all about: survival. A woman, armed with two hooks and insane, tries to gain access to the diving bell to kill the player. The attempt fails, and an unknown person named Atlas makes contact with the player. Atlas introduces the player to the history of Rapture. The goal of the megalomaniacal scientist Andrew Ryan was to create a world beneath the surface of the water, where science, art, and society can develop unhindered without any rules or restrictions. Of course, this attempt failed. A new drug called Adam gradually transformed the inhabitants into zombies driven only by the addiction to Adam. As a reward for his help, Atlas demands the rescue of his family. So the player sets out to find and save them.

Where can I buy a BioShock Key?

With GameGator, you are able to compare deals across verified and trusted stores to find the cheapest BioShock Key for a fair price. All stores currently listed have to undergo very specific testing to ensure that customer support, game deliveries, and the game keys themselves are of the highest quality. To sweeten the deal, we offer you specific discount codes, which you will not be able to find anywhere else. This allows us to beat all competitor prices and provide you with the cheapest, most trustworthy deals. If the current cheapest price of $4.91 for BioShock is too high, create a price alert and we will alert you through email, SMS, or discord the moment the BioShock price matches your budget.

Can I play BioShock immediately after the purchase?

What store should I choose for the best BioShock Deal?