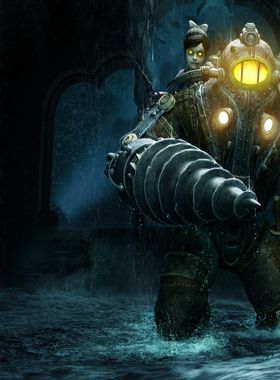 Unfortunately, there are only a few first-person shooters that offer an exciting story in addition to the action. Bioshock from the year 2007 was one of these titles and told a fascinating story about an ideal world that turned into a negative one, a so-called dystopia. The megalomaniacal, but also idealistic industrialist Andrew Ryan built his utopia underwater shortly after World War II, unnoticed by the outside world, and called it Rapture. In this vast underwater city, the inhabitants were able to develop freely, far away from gods, kings, and other ideologies. Accordingly, science was not subject to any constraints and created a hybrid world between current Art Déco urban architecture and modern technical achievements, including stem cell research and genetic improvements. This, however, was also the reason for the decline of this apparent ideal world. Scientists found stem cells in a sea snail, experimented uncontrolled, and applied their findings to humans to improve their abilities. Here, a connection to the current discussion about stem cell research can be seen, and the chosen title "Bioshock" makes this even more apparent. But people paid a high price for the unbridled thirst for experimentation. Not only did they mutate and fall into madness, but they also became dependent on this substance, which was called ADAM about the first man. And an inner power struggle broke out over this substance in Rapture, in the middle of which the protagonist Jack, in the early part, stepped in from the upper world seemingly by chance. In "Bioshock 2" the events in the underwater world continue to be told, but they are set approximately ten years later, at the end of the 1960s. This time the player takes on the role of a "Big Daddy" and roams through the frighteningly beautiful underwater world of Rapture, quickly realizing that he is once again being abused as a pawn in an inner power struggle.

Where can I buy a BioShock 2 Key?

With GameGator, you are able to compare 32 deals across verified and trusted stores to find the cheapest BioShock 2 Key for a fair price. All stores currently listed have to undergo very specific testing to ensure that customer support, game deliveries, and the game keys themselves are of the highest quality. To sweeten the deal, we offer you specific discount codes, which you will not be able to find anywhere else. This allows us to beat all competitor prices and provide you with the cheapest, most trustworthy deals. If the current cheapest price of $3.75 for BioShock 2 is too high, create a price alert and we will alert you through email, SMS, or discord the moment the BioShock 2 price matches your budget.

Can I play BioShock 2 immediately after the purchase?

What store should I choose for the best BioShock 2 Deal?