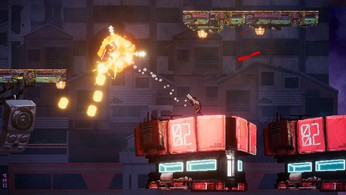 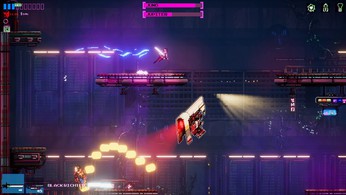 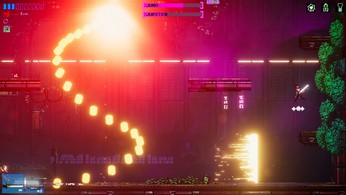 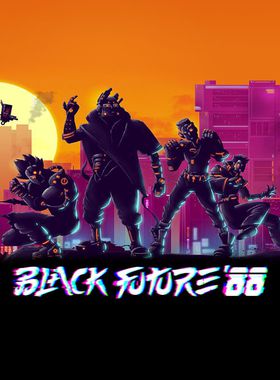 Black Future '88 is a Synth-Punk roguelike 2D action Shooter. Vertically climb an always evolving procedural tower to reach the top and kill its insane owner…before your heart explodes. Shoot, slash, dash and upgrade yourself to survive the endless waves of deadly traps, homicidal AI, crazed junkies and colossal Wardens standing in your way in a stylish alternative version of 1988.

The world is reeling from a nuclear cataclysm, created by Duncan, the tower architect. The First of his bombs fell in the summer of 1988, and by December they had blacked-out the sun with endless rain. We decided to stop keeping time after this, and it's been 1988 ever since. Everything that lived through the initial attack will die in the extreme floods that followed. These are the times after, where there are no more months, or even weeks…everything is measured in minutes left to live.

Take on the mantle of one of the last remaining misfit survivors, and fight your way to the top of the tower to kill the architect and stop the endless nuclear rain. Ascend to die, and die to survive. Climb an always evolving procedural tower and fight for survival through a constant onslaught of death by fire, lasers, and slashes. Play through a unique take on a retro cyberpunk dystopia, and fight to survive through 5 distinct zones each with their own challenges.

With GameGator, you are able to compare 19 deals across verified and trusted stores to find the cheapest Black Future '88 Key for a fair price. All stores currently listed have to undergo very specific testing to ensure that customer support, game deliveries, and the game keys themselves are of the highest quality. To sweeten the deal, we offer you specific discount codes, which you will not be able to find anywhere else. This allows us to beat all competitor prices and provide you with the cheapest, most trustworthy deals. If the current cheapest price of $0.99 for Black Future '88 is too high, create a price alert and we will alert you through email, SMS, or discord the moment the Black Future '88 price matches your budget.

Can I play Black Future '88 immediately after the purchase?

What store should I choose for the best Black Future '88 Deal?