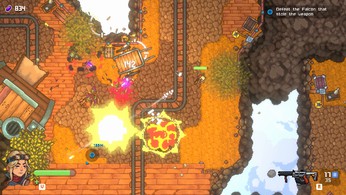 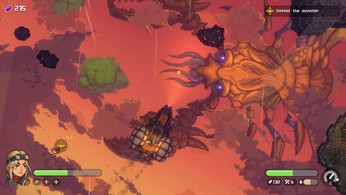 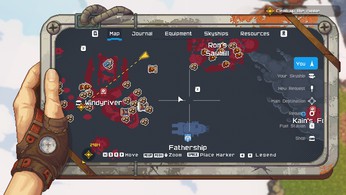 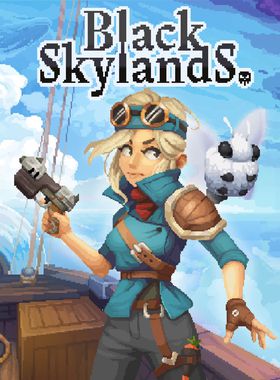 Prepare to set sail… Through the skies! Black Skylands is the first video game in the skypunk genre that combines elements of Open World, Sandbox, Top-Down Shooter and Action/Adventure. Fight in the skies and on land: combine aerial and ground combat, having dozens of weapons in your arsenal. Encountered a group of enemies that is too tough for you to handle? Execute an aerial attack! And don't forget to use your trusty grappling hook to throw enemies into the cloudy abyss;

Customize your vessel and weaponry: choose a skyship that fits your playstyle, be it a small maneuverable boat or a heavy machine with a high-capacity cargo hold. When on foot, harness the power of firearms by enhancing them with different mods and using special abilities to destroy your foes;

Build, expand and protect your aerial base: make your trusty Fathership an impregnable flying fortress and repel intruders' attacks. Resources you gather can be used to build facilities aboard the Fathership. For example, a Workshop lets you acquire useful upgrades for airships & weapons, a Factory processes resources and a Laboratory allows you to create powerful artifacts. Also, make sure to construct buildings like Gardens and Ranches to grow & harvest crops. Keep your people well-fed!

Capture territories: craft alliances and clear out occupied lands to expand the power of your faction. New resources, researches, characters and other features become available as you expand your influence;

Explore a sprawling open world: venture into the skies and discover countless floating lands full of secrets & loot. Travel across forests, farms, snowy lands, urban jungle and the mysterious Black Skylands themselves. Discover ancient secrets and take risks to unleash powers behind them;

Many years ago, Earth turned into thousands of islands floating in the air. In the new world, peoples of Aspya used to live in peace… Until it all came to an end. You are Eva — a proud daughter of the Earners. After an scientific discovery goes horribly awry, your homeland is plunged into relentless struggle against the Swarm — a terrifying species who know no mercy and feel no remorse.

Not only you must stop the Swarm's onslaught, but also stand against the Falcons led by cruel and arrogant Kain. After seizing power in the Earners' lands to protect them from the invading monstrosities, this usurper becomes a menacing threat himself.

Where can I buy a Black Skylands Key?

With GameGator, you are able to compare 15 deals across verified and trusted stores to find the cheapest Black Skylands Key for a fair price. All stores currently listed have to undergo very specific testing to ensure that customer support, game deliveries, and the game keys themselves are of the highest quality. To sweeten the deal, we offer you specific discount codes, which you will not be able to find anywhere else. This allows us to beat all competitor prices and provide you with the cheapest, most trustworthy deals. If the current cheapest price of $1.99 for Black Skylands is too high, create a price alert and we will alert you through email, SMS, or discord the moment the Black Skylands price matches your budget.

Can I play Black Skylands immediately after the purchase?

What store should I choose for the best Black Skylands Deal?