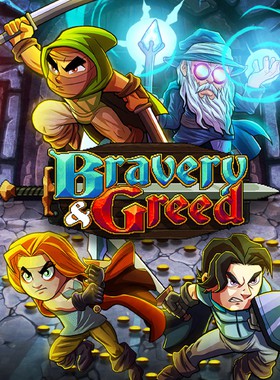 About Bravery and Greed

Deep Robust Combat SystemWhether you're playing as the mighty Amazon, the valiant Warrior, agile Rogue or spell-weaving Wizard, each class possesses a breadth of fantastic and powerful combo move sets. Parry, dodge, juggle, zone and unleash destructive special moves to take the upper hand against ever mightier foes, bosses and even your friends.

PvE & PvP VarietyExplore a variety of thrilling environments in Adventure Mode as you tackle biomes and bosses in your search for runes to the Sky Fortress. Team up with friends and battle against wave after wave of enemies in the challenge Survival Mode or settle the grudge with arena-based team and solo PvP.

Customisable Character ChoicesAlong with class choice, you will have to make on-the-fly decisions that alter your character skillset. Skill trees focusing on the aspects of Chaos, Order, Darkness and Life will grant you skill augmentations and special abilities, whilst a myriad of equipment drops ensure that every run feels unique with plenty of options.

Greed is EternalIn Bravery and Greed, you can permanently unlock awesome content and game-altering augmentations by levelling up with gold. Greedily grab coins and plunder chests, steal pockets of gold when reviving allies, or be the first to run and grab loot after an epic encounter, get rich or die trying!

Where can I buy a Bravery and Greed Key?

With GameGator, you are able to compare 9 deals across verified and trusted stores to find the cheapest Bravery and Greed Key for a fair price. All stores currently listed have to undergo very specific testing to ensure that customer support, game deliveries, and the game keys themselves are of the highest quality. To sweeten the deal, we offer you specific discount codes, which you will not be able to find anywhere else. This allows us to beat all competitor prices and provide you with the cheapest, most trustworthy deals. If the current cheapest price of $16.37 for Bravery and Greed is too high, create a price alert and we will alert you through email, SMS, or discord the moment the Bravery and Greed price matches your budget.

Can I play Bravery and Greed immediately after the purchase?

What store should I choose for the best Bravery and Greed Deal?