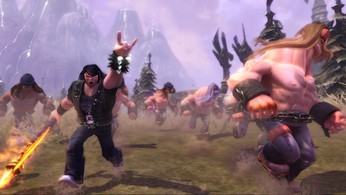 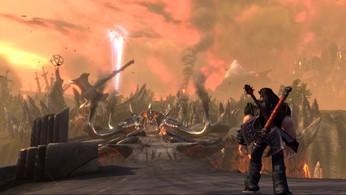 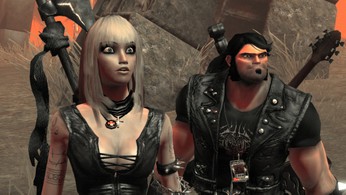 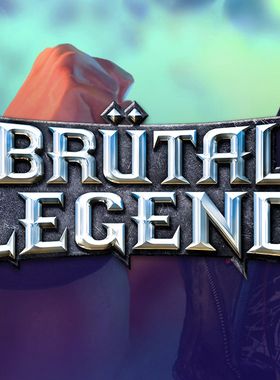 The name Jack Black should be familiar to many people. The American actor already had an appearance in numerous movies, among them in such well-known works like "King Kong" or "High Fidelity". He is also the singer of the comedic rock band "Tenacious D". And now Black is also represented in a video game: The protagonist in "Brütal Legend" not only has his voice, but he also looks like the actor and musician, because Jack Black's face was transferred 1:1 into the game. And the role in "Brütal Legend" is also a perfect fit for him. Eddie Riggs (named after "Eddie the Head", the mascot of the heavy metal band "Iron Maiden" and Derek Riggs, the artist who designed Eddie) is the world's best roadie. Still, unfortunately he works for the probably worst metal band "Kabbage Boy". At one gig, Eddie is killed by a piece of stage equipment falling on him as he tries to save a band member from falling off the stage. In the process, his blood runs onto his cursed belt buckle, which is an amulet of "Ormagödens", the "destroyer of the ancient world". He wakes up, kills the band members of "Kabbage Boy" and abducts Eddie into a Nordic parallel world, where demons enslave humanity. In this world, where everything revolves around the heavy metal, Eddie now becomes the leader of a rebellion to free humankind. "Brütal Legend" is an unusual game. Not only is it a weird mix of action-adventure and real-time strategy games (which unfortunately doesn't always convince), it is also a crazy and loving homage to the heavy metal genre. With its weird characters, the excellent soundtrack (more than 100 licensed metal songs), and the utterly crazy story, it can be quite inspiring for adult players at first. Gradually, however, the game's principles are repeated more and more, and especially the not entirely successful real-time strategy part quickly causes frustration. "Brütal Legend" is, in a certain sense, a target group game. Players who are well versed in the world of heavy metal will find countless allusions to their music and their performers, which are artistically processed in one game. People who are not so familiar with this genre can expect a play that has many exciting ideas and is staged in an extremely humorous way but, unfortunately does not bring everything to a consistent conclusion.

Where can I buy a Brutal Legend Key?

With GameGator, you are able to compare 13 deals across verified and trusted stores to find the cheapest Brutal Legend Key for a fair price. All stores currently listed have to undergo very specific testing to ensure that customer support, game deliveries, and the game keys themselves are of the highest quality. To sweeten the deal, we offer you specific discount codes, which you will not be able to find anywhere else. This allows us to beat all competitor prices and provide you with the cheapest, most trustworthy deals. If the current cheapest price of $1.69 for Brutal Legend is too high, create a price alert and we will alert you through email, SMS, or discord the moment the Brutal Legend price matches your budget.

Can I play Brutal Legend immediately after the purchase?

What store should I choose for the best Brutal Legend Deal?