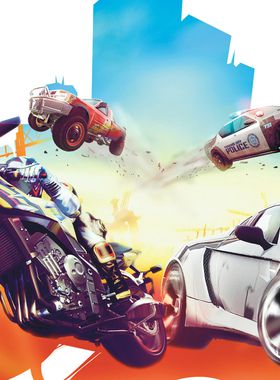 The game series "Burnout" is going into its fifth edition with "Burnout Paradise". Like its predecessors, it has become an adventurous, action-packed racing game that revolves exclusively around cars, carts, and racing cars. Human beings are never to be seen at any time and only play a subliminal role in that a fictitious personality takes a seat in the car without being seen once in the game. The difference to earlier parts is that "Burnout Paradise" does not offer fundamentally different routes, but only a large area, called Paradise City. Paradise City, based on the famous song of the legendary American rock band "Guns N' Roses", offers all facets of a big American city. Run-down ghettos, overcrowded wealthy districts, middle-class apartment blocks, industrial areas, nature trails with a wide variety of flora and fauna, and so on. A scenery that somehow does justice to every player's taste. At the start of the game, you are thrown into this vast, confusing landscape incredibly quickly. From a female voice from the off, however, one receives exact instructions. Who, where, what, how? Everything is explained down to the smallest detail so that no questions remain open. The goals are quickly explained: You start with a car that is ready for the scrap heap, with the smallest of possibilities. Respect, money, new, better cars, and superiority are won through short races, which are designed differently. The task is not always to be the first to reach the finish line, but also to cause as much damage as possible to the competitor. It is up to each player to decide whether to drive these destructive races and when to tackle them. You could also pass the time by driving your almost wrecked car for days and hours through the landscape without following the instructions of "Burnout Paradise" for even a second and suffering a total loss.

Where can I buy a Burnout Paradise: The Ultimate Box Complete Edition Key?

Can I play Burnout Paradise: The Ultimate Box Complete Edition immediately after the purchase?

What store should I choose for the best Burnout Paradise: The Ultimate Box Complete Edition Deal?