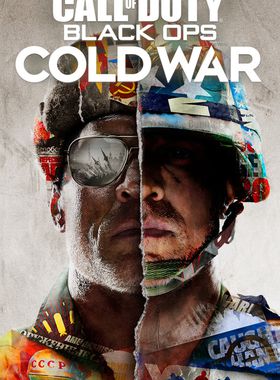 Black Ops Cold War immerses fans into the depths of the sensitive geopolitical battle of the Cold War in the early 1980s. Face historical figures and harsh truths and fight in prominent locations around the world, including East Berlin, Vietnam, Turkey, the Soviet KGB headquarters, and many more. As an elite agent, you follow the trail of a shady character named Perseus, who is on a mission to shake the global power structure and change the course of history. Descend into the dark heart of a global conspiracy alongside legendary characters like Woods, Mason, and Hudson, as well as new agents who seek to prevent a plan that has been forged for decades.

The game is based on the proven Black Ops style and combines elements of 1980s pop culture with a mad conspiracy story - deception and cheating are the order of the day. In this sequel to the first Call of Duty: Black Ops, players can equip an extensive arsenal of Cold War weapons and equipment for a next generation Zombie and multiplayer experience. The game supports cross play for both current and next-generation systems and cross-platform updates in all modes. Call of Duty: Black Ops Cold War features a Battle Pass system and free in-game content upon release, including multiplayer maps and modes, a zombie experience, and in-game community events.

Black Ops Cold War supports shared achievements for Warzone and features brand new inventory items that can be used in both games. Warzone players continue to have access to all Call of Duty: Modern Warfare content, including all previously earned Operator and Weapon Building Plans.

Where can I buy a Call of Duty: Black Ops Cold War Key?

With GameGator, you are able to compare 4 deals across verified and trusted stores to find the cheapest Call of Duty: Black Ops Cold War Key for a fair price. All stores currently listed have to undergo very specific testing to ensure that customer support, game deliveries, and the game keys themselves are of the highest quality. To sweeten the deal, we offer you specific discount codes, which you will not be able to find anywhere else. This allows us to beat all competitor prices and provide you with the cheapest, most trustworthy deals. If the current cheapest price of $59.99 for Call of Duty: Black Ops Cold War is too high, create a price alert and we will alert you through email, SMS, or discord the moment the Call of Duty: Black Ops Cold War price matches your budget.

Can I play Call of Duty: Black Ops Cold War immediately after the purchase?

What store should I choose for the best Call of Duty: Black Ops Cold War Deal?