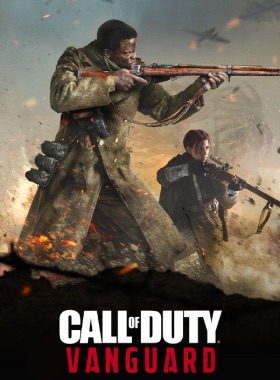 About Call of Duty: Vanguard

Rise on every front starting: Witness the origins of Special Forces in a gripping Campaign. Become a Special Forces Operator in adrenaline-fueled online Multiplayer. Experience a universe-expanding Zombies crossover. Featuring full integration with Warzone, including a brand-new map.

This is WWII combat like never before. Witness the origins of Special Forces as you play a pivotal role and change the face of history, forming Task Force One in a gripping Campaign across four major theaters of war. Become an original Special Forces Operator in an online Multiplayer rich in innovation with 20 maps available at launch. Prepare for a franchise-first, universe-expanding Zombies crossover. Immerse yourself in a fully integrated Call of Duty: Warzone experience featuring a new and massive map. This is the most connected Call of Duty ever, all powered by the next generation Call of Duty engine introduced in Modern Warfare.

Experience influential battles of World War II as you fight for victory across multiple theaters of war. The Call of Duty: Vanguard campaign will immerse you in a deeply engaging and gripping character-driven narrative experience featuring combat on an unparalleled global scale, while also telling the harrowing stories of those who turned the tides of war and changed history forever.

Become the vanguards of the changing face of war as you make your mark across Call of Duty’s signature core gunplay and Multiplayer experience. Prove your mettle as you try to survive the relentless onslaught of the undead in a chilling new Zombies experience, developed by Treyarch Studios.

Where can I buy a Call of Duty: Vanguard Key?

With GameGator, you are able to compare 3 deals across verified and trusted stores to find the cheapest Call of Duty: Vanguard Key for a fair price. All stores currently listed have to undergo very specific testing to ensure that customer support, game deliveries, and the game keys themselves are of the highest quality. To sweeten the deal, we offer you specific discount codes, which you will not be able to find anywhere else. This allows us to beat all competitor prices and provide you with the cheapest, most trustworthy deals. If the current cheapest price of $58.19 for Call of Duty: Vanguard is too high, create a price alert and we will alert you through email, SMS, or discord the moment the Call of Duty: Vanguard price matches your budget.

Can I play Call of Duty: Vanguard immediately after the purchase?

What store should I choose for the best Call of Duty: Vanguard Deal?