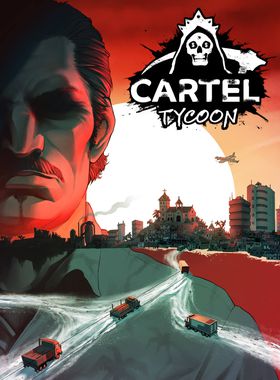 Set in a fictionalized 1980s Latin America, Cartel Tycoon tells the story of a time when cocaine took over first the US, and then the whole world. Ridiculously rich drug kingpins rule their glorious empires, creating thousands of jobs. But at the same time, a maelstrom of violence envelops this criminal world.

Build an empire of drug production and smuggling chains while dealing with rival cartels, your rogue lieutenants, state authorities, and public opinion. Deal in marijuana, cocaine, methamphetamine and legal goods that are a front for your drug trade. Conquer neighboring regions and send profits climbing to unlock new upgrade paths and powerful research opportunities. Adapt on the fly to procedurally-generated events.

Authorities, rival cartels, the DEA, army and even the CIA all threaten your growing business. When you die (it never does truly end well for drug lords), take over the empire as your successor, and build your empire from the ruins all over again.

Where can I buy a Cartel Tycoon Key?

With GameGator, you are able to compare 3 deals across 3 verified and trusted stores to find the cheapest Cartel Tycoon Key for a fair price. All stores currently listed have to undergo very specific testing to ensure that customer support, game deliveries, and the game keys themselves are of the highest quality. To sweeten the deal, we offer you specific discount codes, which you will not be able to find anywhere else. This allows us to beat all competitor prices and provide you with the cheapest, most trustworthy deals. If the current cheapest price of $6.61 for Cartel Tycoon is too high, create a price alert and we will alert you through email, SMS, or discord the moment the Cartel Tycoon price matches your budget.

Can I play Cartel Tycoon immediately after the purchase?

What store should I choose for the best Cartel Tycoon Deal?