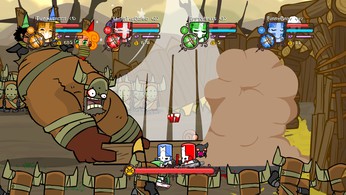 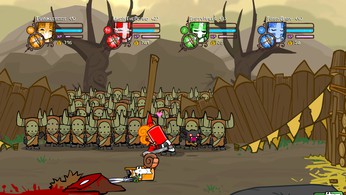 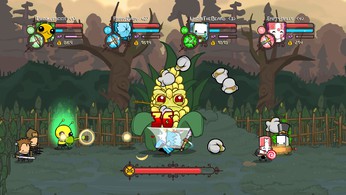 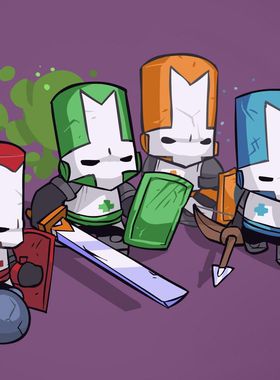 Castle Crashers is a beat 'em up with elements of a role-playing game. There are 31 playable characters available in the game, which you must unlock bit by bit or purchase through downloadable expansion packs (DLCs). After choosing a character, the player must select the level to play on a map. After completing a level, the player has the choice of playing it again or switching to another level. The map also shows shops where the character can buy items and weapons with coins captured from enemies. Castle Crashers supports cooperative play with up to four players, either locally or online. Each of the four can purchase experience points, equipment, and weapons. In battle, players can choose between close combat and ranged combat. In close combat, the player can attack many different swords, clubs, and axes. In ranged combat, the player has a bow and his magic at his disposal. Each character has a unique magical ability and a life bar that shows the rest of the character's life. In single-player mode, if the life bar is empty, the player has to start the level all over again; in multiplayer mode, the other players can resurrect him. Characters gain experience points by killing enemies, which they use to advance in the level. For each level won, the player receives points that he can invest in one of the four attributes. He can choose between strength, magic, defense, and agility. The numerous weapons in the game also have positive and negative effects on the characteristics of the characters. The player can find animals to accompany him and support him in battle or to improve the attributes. Besides the main game, Castle Crashers also offers some mini-games for up to four players.

Where can I buy a Castle Crashers Key?

With GameGator, you are able to compare 10 deals across verified and trusted stores to find the cheapest Castle Crashers Key for a fair price. All stores currently listed have to undergo very specific testing to ensure that customer support, game deliveries, and the game keys themselves are of the highest quality. To sweeten the deal, we offer you specific discount codes, which you will not be able to find anywhere else. This allows us to beat all competitor prices and provide you with the cheapest, most trustworthy deals. If the current cheapest price of $10.89 for Castle Crashers is too high, create a price alert and we will alert you through email, SMS, or discord the moment the Castle Crashers price matches your budget.

Can I play Castle Crashers immediately after the purchase?

What store should I choose for the best Castle Crashers Deal?