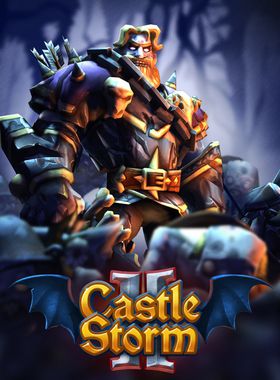 CastleStorm 2 levels up gaming's greatest genre mishmash with ruthless destruction powered by Unreal 4, plus a whole new metagame of strategic, tactical conquest. The heroes of the Kingdom confront the vile forces of the Undead, and you'll plot your path to triumph for both sides in two epic story-driven campaigns. But not without some hands-on chaotic carnage and delightful devastation!

CastleStorm 2 returns to a classic fantasy land of medieval madness, rife with heroic knights, enchanting sorceresses, glorious griffins…and sheep. But a new threat rises – literally…as in, from the grave. Walking corpses. Headless horsemen. ZOMBIE sheep. All-around nasty necromancy. You get the picture. Build an entire empire through gameplay that engages your inner hardcore strategist…then command – even CONTROL – your soldiers en route to triumph!

Where can I buy a CastleStorm 2 Key?

With GameGator, you are able to compare deals across verified and trusted stores to find the cheapest CastleStorm 2 Key for a fair price. All stores currently listed have to undergo very specific testing to ensure that customer support, game deliveries, and the game keys themselves are of the highest quality. To sweeten the deal, we offer you specific discount codes, which you will not be able to find anywhere else. This allows us to beat all competitor prices and provide you with the cheapest, most trustworthy deals. If the current cheapest price of $19.99 for CastleStorm 2 is too high, create a price alert and we will alert you through email, SMS, or discord the moment the CastleStorm 2 price matches your budget.

Can I play CastleStorm 2 immediately after the purchase?

What store should I choose for the best CastleStorm 2 Deal?