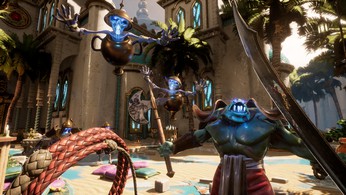 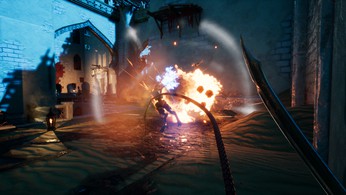 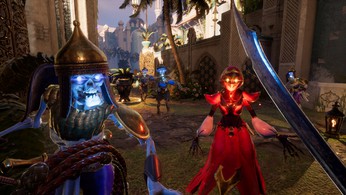 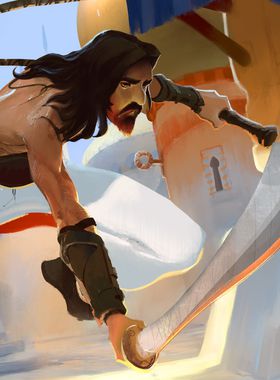 About City of Brass

First-Person Arabian Nights Rogue-Lite!
Become a daring thief in City of Brass, a first-person action adventure from senior BioShock developers. Armed with scimitar and a versatile whip, you'll lash and slash, bait and trap your way to the heart of an opulent, Arabian Nights-themed metropolis – or face certain death as time runs out.

This City Has Teeth!
Players will have to leap across pits, slide under blades, avoid spears or arrows, evade or employ sprung paving slabs, and skirt round poison gas traps – all the while manipulating these dangers to their advantage against enemies.

Deadly Magic, Mischievous Genies!
Incarcerated within the city are genies, most of them friendly, who will barter benefits in return for loot or grant wishes for a powerful advantage.

Endless Death, Eternal Replayability!
The rhythmic interplay between sword and whip is carefully tuned along with sprinting, crouching, sliding, leaping and vaulting to give a fluid, balanced and natural feel to the movement and melee. Eternal replayability is granted by a design that encourages combinative gameplay within an ever-changing but logical procedurally generated world. Players will die in the City of Brass – often, and quite horribly – but they will always want to come back for just one more try…

Where can I buy a City of Brass Key?

With GameGator, you are able to compare 3 deals across verified and trusted stores to find the cheapest City of Brass Key for a fair price. All stores currently listed have to undergo very specific testing to ensure that customer support, game deliveries, and the game keys themselves are of the highest quality. To sweeten the deal, we offer you specific discount codes, which you will not be able to find anywhere else. This allows us to beat all competitor prices and provide you with the cheapest, most trustworthy deals. If the current cheapest price of $1.99 for City of Brass is too high, create a price alert and we will alert you through email, SMS, or discord the moment the City of Brass price matches your budget.

Can I play City of Brass immediately after the purchase?

What store should I choose for the best City of Brass Deal?