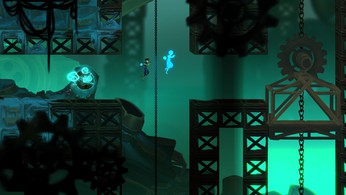 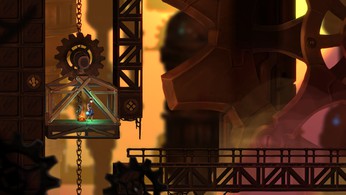 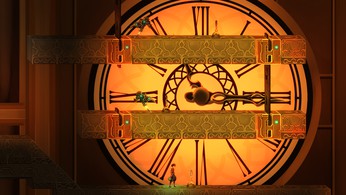 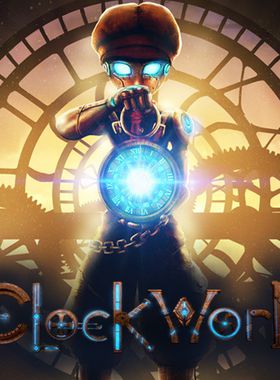 Clockwork, set in the great mechanical city of Watchtower, is a story about unlikely friends coming together to try to fix an imperfect world. The city's mysterious past is questioned when Atto's trusty pocket watch suddenly wakes up and introduces itself as Milli. Renewed with a sense of purpose, Atto and Milli must explore the city, control time and confront terrifying bosses, before it's too late.

Atto was only eight years old when his body was encased in metal. He remembers nothing of the time before. He only knows that someone must have given him his beautiful pocket watch, and a restless urge to fix things.

Milli is a masterpiece of mechanical ingenuity. She has detailed knowledge of the workings of Watchtower. And more importantly: of time itself. Yet, she knows nothing of her origins, except that she was meant for a great purpose.

In the ruins of a dead world stands the great city of Watchtower. The city has survived for four hundred years, longer than most of its citizens can remember. A few whisper about the time of the great plague; a time when the desperate survivors grew so afraid for their fleshly bodies that they encased themselves in metal ones - bodies that would rust and break down, but never sicken and die. Since then they have waited, counting the days as the city falls into ruin.

Explore the many districts of the city of Watchtower; from the festering, corroded slums of Poisonville to the glittering spires of Crystal Heights. Each rendered in a unique hand-drawn steampunk art style.

Are you ready to enter the world of Watchtower?

Where can I buy a Clockwork Key?

With GameGator, you are able to compare 2 deals across verified and trusted stores to find the cheapest Clockwork Key for a fair price. All stores currently listed have to undergo very specific testing to ensure that customer support, game deliveries, and the game keys themselves are of the highest quality. To sweeten the deal, we offer you specific discount codes, which you will not be able to find anywhere else. This allows us to beat all competitor prices and provide you with the cheapest, most trustworthy deals. If the current cheapest price of $2.99 for Clockwork is too high, create a price alert and we will alert you through email, SMS, or discord the moment the Clockwork price matches your budget.

Can I play Clockwork immediately after the purchase?

What store should I choose for the best Clockwork Deal?