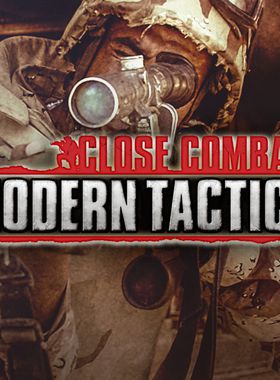 Engage in combat with up to 5 players per side and participate in intense head to head battles using Modern Era weaponry and equipment on gorgeous hand-drawn maps measuring from 1km square to giant 4km x 1km maps.

Fight on hypothetical battlefields ranging in style from backwoods America to the streets of Iraq and the former Soviet republics.  Deal with everything the enemy can throw at you in a series of immersive, action-packed engagements that will test your tactical abilities!

Air and artillery support are on-call, but the final objective can only be secured by Close Combat. A scenario editor is also included, making it easy to set up your own battles with modern opposing forces.

Where can I buy a Close Combat: Modern Tactics Key?

With GameGator, you are able to compare 3 deals across verified and trusted stores to find the cheapest Close Combat: Modern Tactics Key for a fair price. All stores currently listed have to undergo very specific testing to ensure that customer support, game deliveries, and the game keys themselves are of the highest quality. To sweeten the deal, we offer you specific discount codes, which you will not be able to find anywhere else. This allows us to beat all competitor prices and provide you with the cheapest, most trustworthy deals. If the current cheapest price of $26.99 for Close Combat: Modern Tactics is too high, create a price alert and we will alert you through email, SMS, or discord the moment the Close Combat: Modern Tactics price matches your budget.

Can I play Close Combat: Modern Tactics immediately after the purchase?

What store should I choose for the best Close Combat: Modern Tactics Deal?