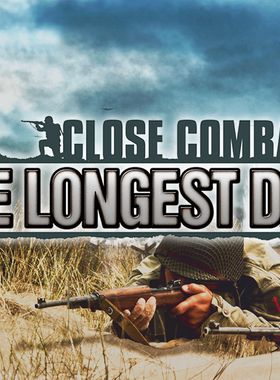 About Close Combat: The Longest Day

Close Combat is a pausable real-time wargame series, heavily focused on historical accuracy and realistic soldier psychological profiles. Team management is crucial as every man in your teams matter. in Close Combat: the Longest Day take command of either the Allied Expeditionary Force or Germany's Wehrmacht. Close Combat - The Longest Day is a highly enhanced rebuild of the critically acclaimed Close Combat Invasion Normandy, originally developed by Atomic Games.

You will either carry out the world's largest amphibious invasion to liberate Europe from Nazi occupation or defend Hitler's Atlantic Wall! Includes simulated flare effects and full lighting effects where ability to see the enemy troops is effected by flare deployment as well as light sources such as explosions and fires. New reports at the end of battle showing campaign cohesion and VL control track your progress after each bout. Also displays battlegroup cohesion and fatigue status.

Where can I buy a Close Combat: The Longest Day Key?

With GameGator, you are able to compare deals across verified and trusted stores to find the cheapest Close Combat: The Longest Day Key for a fair price. All stores currently listed have to undergo very specific testing to ensure that customer support, game deliveries, and the game keys themselves are of the highest quality. To sweeten the deal, we offer you specific discount codes, which you will not be able to find anywhere else. This allows us to beat all competitor prices and provide you with the cheapest, most trustworthy deals. If the current cheapest price of $35.99 for Close Combat: The Longest Day is too high, create a price alert and we will alert you through email, SMS, or discord the moment the Close Combat: The Longest Day price matches your budget.

Can I play Close Combat: The Longest Day immediately after the purchase?

What store should I choose for the best Close Combat: The Longest Day Deal?