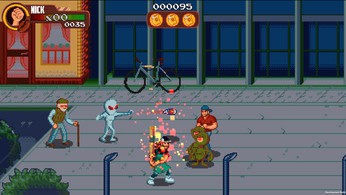 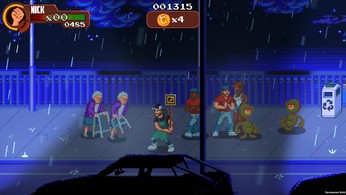 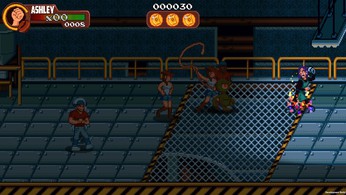 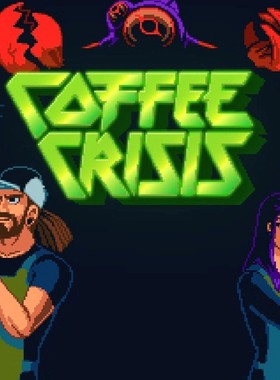 Coffee Crisis is a neo-rogue brawler that puts you in the shoes of the only baristas on Earth with enough heavy metal in their veins to fend off an alien assault. Play solo or join up with a friend to fight across eight unique locations ranging from your Coffee House HQ to the far reaches of outer space. Go up against an army of wild alien enemies, and the humans they have brainwashed with a variety of weapons, special moves, suplexes, and coffee!

The Smurglian race has come to Earth and they're not leaving until they steal our three most prized commodities: heavy metal, free Wifi, and coffee. Crunch through fistfuls of alien meat as you stop their invasion, and enjoy random modifiers to the enemies and action on each playthrough. It's a totally unique cup of beat 'em up action every time you play!

With over 50 different screen effects, power-ups, and enemy tweaks Coffee Crisis is never the same game twice. Take the action to Twitch and allow your audience to choose your fate, or play solo and leave it up to chance.

Where can I buy a Coffee Crisis Key?

With GameGator, you are able to compare 5 deals across verified and trusted stores to find the cheapest Coffee Crisis Key for a fair price. All stores currently listed have to undergo very specific testing to ensure that customer support, game deliveries, and the game keys themselves are of the highest quality. To sweeten the deal, we offer you specific discount codes, which you will not be able to find anywhere else. This allows us to beat all competitor prices and provide you with the cheapest, most trustworthy deals. If the current cheapest price of $0.93 for Coffee Crisis is too high, create a price alert and we will alert you through email, SMS, or discord the moment the Coffee Crisis price matches your budget.

Can I play Coffee Crisis immediately after the purchase?

What store should I choose for the best Coffee Crisis Deal?