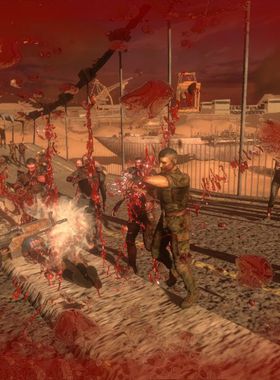 Crimson earth is a 3rd person, over the shoulder, zombie survival game set in a desolate and barren world. Hordes of zombies have taken over, your job is to exterminate them and clear the sectors one at a time.

Exterminate zombies in any manner you see fit. Burn them to a crisp. Headshot them with a sniper rifle from a distance or get up close and tear their limbs off with a pump action shotgun. Push them into an abyss or order an airstrike and destroy the whole horde in a spectacular fashion. The locations include abandoned arenas, ports, deserts, destroyed bridges, labs and more.

Killing zombies earns you credits, credits you can use to unlock new weapons which include an array of automatic, semi automatic, long range sniper rifles, pistols, flamethrowers and shotguns. Limited ammunition in each level means that the player must be conservative and make every shot count, what appears to be a small horde that is kept under control can soon turn into an overwhelming force if you are not careful.

A unique feature in Crimson Earth are the perks that you get on each mission. Upgrade to incendiary ammo rounds that sets zombies on fire, unleash a powerful scatter bomb that destroys a large group of zombies or order an airstrike to level the entire map. These perks can only be used once per level so strategically using them is key to completing a mission.

Unique ways of disposing of zombies, burn them, headshot them or order an airstrike to take out the whole horde.

Where can I buy a Crimson Earth Key?

With GameGator, you are able to compare 4 deals across verified and trusted stores to find the cheapest Crimson Earth Key for a fair price. All stores currently listed have to undergo very specific testing to ensure that customer support, game deliveries, and the game keys themselves are of the highest quality. To sweeten the deal, we offer you specific discount codes, which you will not be able to find anywhere else. This allows us to beat all competitor prices and provide you with the cheapest, most trustworthy deals. If the current cheapest price of $0.16 for Crimson Earth is too high, create a price alert and we will alert you through email, SMS, or discord the moment the Crimson Earth price matches your budget.

Can I play Crimson Earth immediately after the purchase?

What store should I choose for the best Crimson Earth Deal?