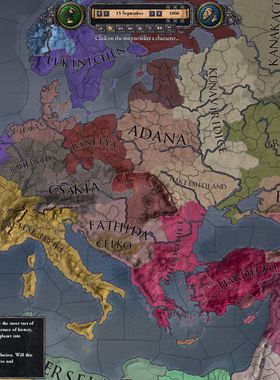 Christ may rule in Rome and Constantinople, but Northern Europe is still home to the old gods of war and the hearth. These faiths will collide in fierce combat as the Prince of Peace brings conversion by the sword, and Gods of Nature demand unnatural sacrifices as the price of their favor.

Holy Fury is the newest expansion to Crusader Kings II, the celebrated medieval role-playing grand strategy experience from the masters of strategy, Paradox Development Studio. Lean on your war lodge for support in your conquests, bow before the Pope to claim your divine throne or establish a legendary bloodline that will echo through the ages.

SHATTERED AND RANDOM WORLDS:
Start your game on a fictional map of Europe as a small realm fighting for space, or on a random map with historical analogues for the great kingdoms of yore.

WARRIOR LODGES:
Join a Pagan warrior lodge and raid your way up the ranks, unlocking access to powerful allies and greater military skill.

AND MUCH MORE:
Changes to religion, custom names for people or objects, deeper baptismal mechanics, lists of people you've killed, and other small changes for flavor and variety.

Where can I buy a Crusader Kings 2: Holy Fury Key?

With GameGator, you are able to compare 15 deals across verified and trusted stores to find the cheapest Crusader Kings 2: Holy Fury Key for a fair price. All stores currently listed have to undergo very specific testing to ensure that customer support, game deliveries, and the game keys themselves are of the highest quality. To sweeten the deal, we offer you specific discount codes, which you will not be able to find anywhere else. This allows us to beat all competitor prices and provide you with the cheapest, most trustworthy deals. If the current cheapest price of $1.68 for Crusader Kings 2: Holy Fury is too high, create a price alert and we will alert you through email, SMS, or discord the moment the Crusader Kings 2: Holy Fury price matches your budget.

Can I play Crusader Kings 2: Holy Fury immediately after the purchase?

What store should I choose for the best Crusader Kings 2: Holy Fury Deal?