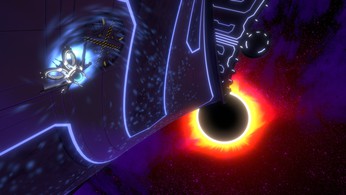 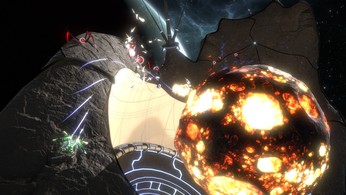 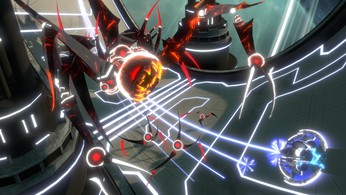 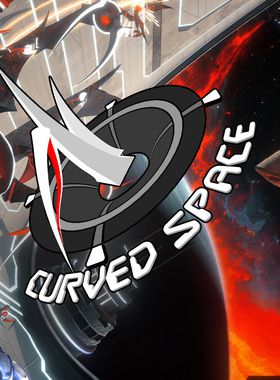 Curved Space is an intense arcade-style twin-stick shooter that takes the classic formula and plunges it into the weirdest reaches of space. Battle cosmic space-invading spiders across curved landscapes where bullets hug the terrain while the horizon drops sharply out of sight.

Inspired by arcade classics, players will have to hunt for weapon power-ups and upgrades while dodging enemy fire, blasting interdimensional bugs, and wrangling some enormous boss monsters. Simple to learn as you fight your way through the branching story-driven campaign, but tough to master as you chase the glory of the leaderboards.

Old School Shmup Reimagined: Enjoy the high-energy action of traditional 2D shoot 'em ups in a warped 3D space. Climb walls, flip over to the other side of your environment, and experience breathtaking vistas.

Play Your Style & Top the Leaderboards: Experience your space pilot's harrowing journey in Campaign, take on new challenges, test your skills, and chase your place on the leaderboards in Daily Runs, Arena, Survival and Endless game modes.

Ride the Synthwave: Get in the zone with a high-energy synthwave soundtrack in partnership with FiXT Neon, featuring artists like Scandroid, 3Force, and Fury Weekend.

Upgrade & Take Them Down: Collect a plethora of ability and weapon upgrades. Weapons are varied (from lasers to flamethrowers to weed wackers!) and equipped with their own overdrive states!

Campaign: Take on the role of an energy harvester in the midst of a galactic spider invasion. Your choices will lead you to take on one of three potential versions of the game's protagonist to fight back the invasion on asteroids, space stations, and other intergalactic stages. Each unique version takes the story in a different direction.

Where can I buy a Curved Space Key?

With GameGator, you are able to compare 4 deals across 4 verified and trusted stores to find the cheapest Curved Space Key for a fair price. All stores currently listed have to undergo very specific testing to ensure that customer support, game deliveries, and the game keys themselves are of the highest quality. To sweeten the deal, we offer you specific discount codes, which you will not be able to find anywhere else. This allows us to beat all competitor prices and provide you with the cheapest, most trustworthy deals. If the current cheapest price of $7.02 for Curved Space is too high, create a price alert and we will alert you through email, SMS, or discord the moment the Curved Space price matches your budget.

Can I play Curved Space immediately after the purchase?

What store should I choose for the best Curved Space Deal?