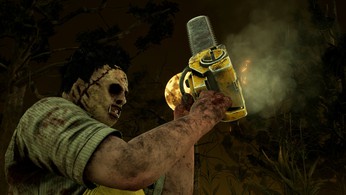 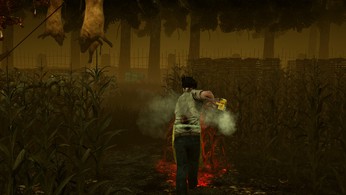 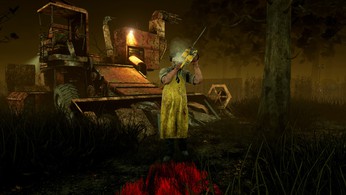 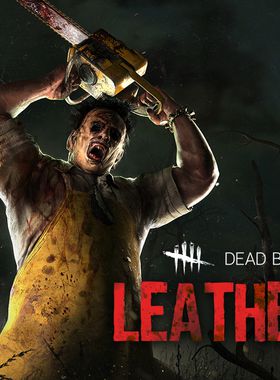 About Dead by Daylight - Leatherface

Leatherface is a Character DLC for Dead by Daylight. This is slaughter in its purest form. A kind of slaughter driven by a pure need of flesh. Leatherface won't fail and he won't stop. As the chainsaw starts, you know what is coming. Pain and fear in a combination of panic as you understand that death isn't the end. You will also end up on someone's plate.

As the saw starts... What happens when the body grows but the mind can't keep up? A child's fears and anxiety, but trapped inside a fully grown man's body. A furious body wielding a chainsaw? Someone who knows what happens as you disobey your family. What happens if anyone finds out what's in the stew.

Leatherface is not only the skin clad maniac with a disturbed mind. He seeks acceptance and appreciation. He's learned the hard way and was molded to what he now is. A watchdog, a guardian, a blind gate keeper who never questions. And all problems can be solved with his chainsaw. An incredibly powerful and heavy Chainsaw which sank its teeth in countless victims. A suiting birthday gift to The Cannibal. The Chainsaw is Leatherface's most deadly weapon. He can use it at will, doing devastating sweeping attacks with it.

Leatherface comes with 3 new Perks:The trauma caused by your brutal attacks makes crying for help painfully difficult. Dying survivors' auras are not revealed to other survivors when they are standing out of range. A deep bond with The Entity unlocks potential in one's aura reading ability. After hooking a Survivor, all other Survivors' aura are revealed to you for 3 seconds when they are further than 36 meters from the hook. Grants bonus Bloodpoints on any scoring event while a Survivor is on the hook. Your vicious attacks make the Survivors drop their item on impact. The lost item is damaged in the fall, losing a portion of its base amount of charges.

Where can I buy a Dead by Daylight - Leatherface Key?

With GameGator, you are able to compare 10 deals across verified and trusted stores to find the cheapest Dead by Daylight - Leatherface Key for a fair price. All stores currently listed have to undergo very specific testing to ensure that customer support, game deliveries, and the game keys themselves are of the highest quality. To sweeten the deal, we offer you specific discount codes, which you will not be able to find anywhere else. This allows us to beat all competitor prices and provide you with the cheapest, most trustworthy deals. If the current cheapest price of $3.72 for Dead by Daylight - Leatherface is too high, create a price alert and we will alert you through email, SMS, or discord the moment the Dead by Daylight - Leatherface price matches your budget.

Can I play Dead by Daylight - Leatherface immediately after the purchase?

What store should I choose for the best Dead by Daylight - Leatherface Deal?