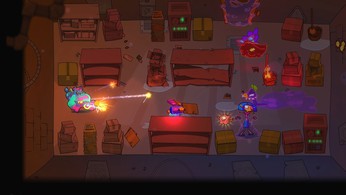 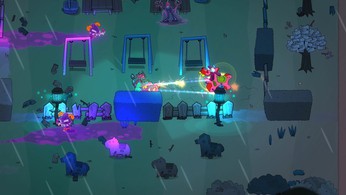 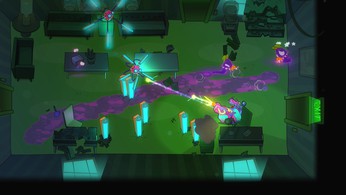 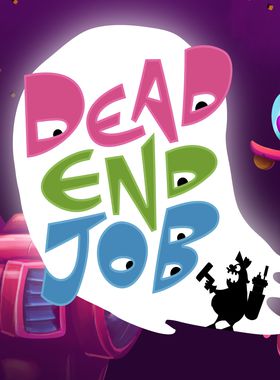 Dead End Job sends you into a madcap, Ren & Stimpy-esque world to bust up ghosts. It's a procedurally generated, couch co-op, twin-stick shooter that straps a vacuum pack to your back, and puts a plasma blaster in your hand. For you, it's just another day in the office. You take on the role of Hector Plasm, a worker at Ghoul-B-Gone – 'the Number One experts in paranormal pest control' – as you're tasked with heading to Haunted offices, restaurants, and other everyday buildings before freeing them of unwanted guests. One minute you're sucking up specters, the next you're sucking up to your bosses, chasing that promotion. Have you got what it takes to be the best at putting pests to rest?

Exercise that fighting spirit, since every specter you snag and every resident you rescue is added to your client's bill at the end of the job. Haunted by the ghost of your mentor, quite literally, you must learn the ropes and to save her soul before she's forced to spend eternity as a spook (voted "Least Preferred Fate" in Ghost Hunter Monthly).

Play alone or bust ghosts with a buddy in drop in / drop out co-op that works seamlessly within the main adventure. Plus you can play to an audience with Twitch and Mixer interactivity that allows viewers to help or hinder your assault on the afterlife.

Where can I buy a Dead End Job Key?

With GameGator, you are able to compare 10 deals across verified and trusted stores to find the cheapest Dead End Job Key for a fair price. All stores currently listed have to undergo very specific testing to ensure that customer support, game deliveries, and the game keys themselves are of the highest quality. To sweeten the deal, we offer you specific discount codes, which you will not be able to find anywhere else. This allows us to beat all competitor prices and provide you with the cheapest, most trustworthy deals. If the current cheapest price of $1.14 for Dead End Job is too high, create a price alert and we will alert you through email, SMS, or discord the moment the Dead End Job price matches your budget.

Can I play Dead End Job immediately after the purchase?

What store should I choose for the best Dead End Job Deal?