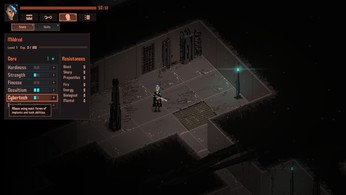 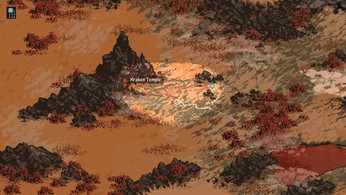 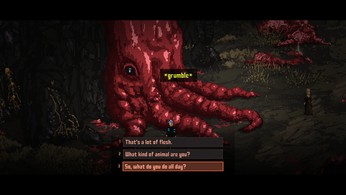 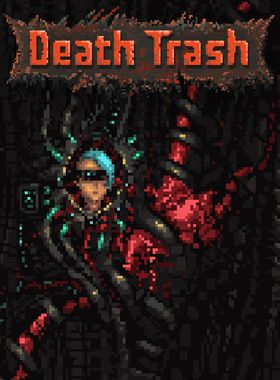 Death Trash features a world where cosmic horrors long for humanity but meet punks with shotguns. Influenced by post-apocalyptic, horror, and cyberpunk classics but with a fresh personality of its own. Death Trash combines the crunch and depth of old-school, role-playing classics with the controls and game feel of modern games.

Death Trash is an open-world, singleplayer role-playing game with handcrafted levels, a strong story campaign and optional local co-op gameplay. The game features real-time gameplay with ranged and melee combat, stealth, multiple choice dialogue, an inventory of items and worms, a crafting system, and skills like pickpocketing and puking.

Travel through a gritty, post-apocalyptic wasteland by world map and explore hand-painted, organic locations. Meet exciting characters, talk to the Fleshkraken, visit the Puke Bar, or descend into old temples in search of expanding your awareness.

Humans traveled to the stars and some of them settled on the planet Nexus with its ancient secrets of stone and flesh. But secrets were unearthed, and the civilized people had to flee into enclosed habitats. The wasteland is reigned now by outcasts, controlling machines, and offsprings of the worm. You are one of the outcasts, pushed outside with a dangerous burden to carry, and your path will take you through deserts, ruins, the underground, and beyond.

Where can I buy a Death Trash Key?

With GameGator, you are able to compare 10 deals across 8 verified and trusted stores to find the cheapest Death Trash Key for a fair price. All stores currently listed have to undergo very specific testing to ensure that customer support, game deliveries, and the game keys themselves are of the highest quality. To sweeten the deal, we offer you 4 specific discount codes, which you will not be able to find anywhere else. This allows us to beat all competitor prices and provide you with the cheapest, most trustworthy deals. If the current cheapest price of $19.11 for Death Trash is too high, create a price alert and we will alert you through email, SMS, or discord the moment the Death Trash price matches your budget.

Can I play Death Trash immediately after the purchase?

What store should I choose for the best Death Trash Deal?