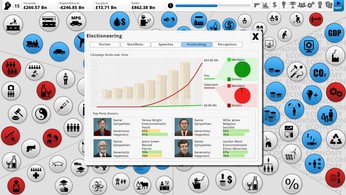 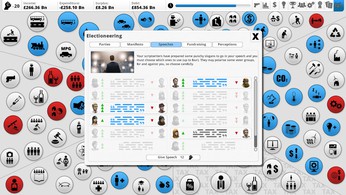 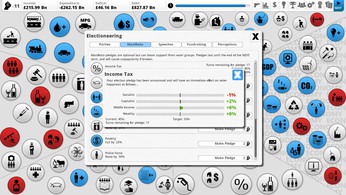 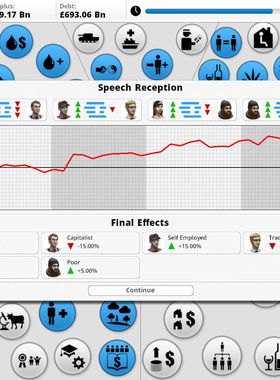 Have you ever thought that the voters in Democracy 3 seemed a little bit *too* rational? a little bit too analytical about how government policy affected them? Blind to the public image of the candidates, unconcerned with the sound-bites and slogans of a real-world political campaign? Ever thought that your role as president or prime minister was suspiciously isolated from the concerns of wealthy party donors and public perceptions (even wrong ones) of your governments motivations? Democracy 3: Electioneering brings emotional irrationality to your electorate!

Democracy 3: Electioneering adds speeches and manifestos to the game, allowing you to completely ignore (or frankly screw-over) a slice of the electorate whilst simultaneously saying all the right things about them when you are on TV. Speeches can fill the gaps where policy has failed, or was maybe never even attempted!. If speeches dont get the job done, the election is near and opinion polls are low, manifesto promises allow you to make a loud clear commitment to policy decisions for after the election. If you win...well you *should* stick to them, but maybe its worth just taking the hit and quietly forgetting all about them?

If rational debate and oratory do not win over the electorate, a major campaign of adverts just might, but to make that work your party needs funds. If membership is low, you can make up the difference with wealthy party-donors, but beware, upset them and they will keep their money in their pockets. If fundraising isnt cutting it, you may find a healthy dose of media-spin will persuade the voters to support you. Shake hands with soldiers, help out at a food-bank, visit an orphanage...whatever it takes to make the electorate think you are a compassionate, trustworthy and strong leader.

Where can I buy a Democracy 3: Electioneering Key?

With GameGator, you are able to compare 2 deals across verified and trusted stores to find the cheapest Democracy 3: Electioneering Key for a fair price. All stores currently listed have to undergo very specific testing to ensure that customer support, game deliveries, and the game keys themselves are of the highest quality. To sweeten the deal, we offer you specific discount codes, which you will not be able to find anywhere else. This allows us to beat all competitor prices and provide you with the cheapest, most trustworthy deals. If the current cheapest price of $5.99 for Democracy 3: Electioneering is too high, create a price alert and we will alert you through email, SMS, or discord the moment the Democracy 3: Electioneering price matches your budget.

Can I play Democracy 3: Electioneering immediately after the purchase?

What store should I choose for the best Democracy 3: Electioneering Deal?