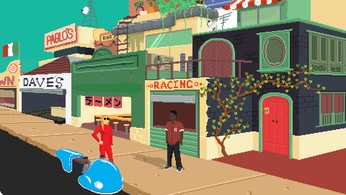 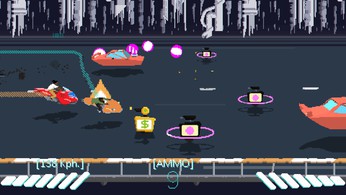 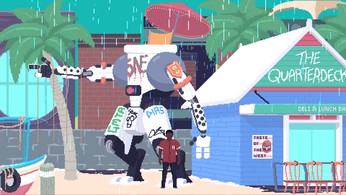 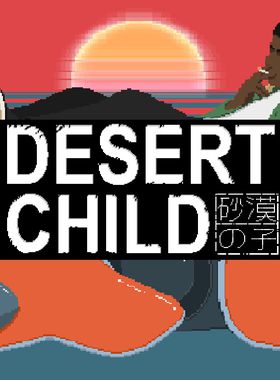 You're broke, you're hungry, and your only friends are a vintage hoverbike and a bowl of ramen noodles.

In Desert Child, you are a young and talented hoverbike racer who needs to figure out how you can scrape enough cash together through racing and odd jobs to punch your one-way ticket to the Red Planet to enter the biggest race in the universe, the Grand Prix.

The world as we know it is slowly starting to become unhabitable, as many people on Earth have moved to Mars for a better quality of life, thanks to a government subsidy that assisted in relocating citizens by providing affordable passage. After several years of running this program, the government announces that in two weeks, tickets to Mars would go up in price, making the exodus to the Red Planet unobtainable for regular citizens.

You'll deliver pizzas, collect gun parts, hunt bounties, and make some fans along the way. In between races, you'll explore colorful cities where you can repair and upgrade your bike, dine on the local cuisine, and fight your way through gangsters, bounty hunters, and all sorts of interesting characters, just so that you can have a decent meal and keep your bike running.

Hunt bounties, deliver pizzas, throw races - do anything you can to earn cash

Customize your beloved bike with Guns, Amplifiers and shameless advertising

Master deep combat and racing mechanics and define your own style

Race, shoot, and get better! Designed for replayability, with secrets that keep you coming back

Challenge your friends through local multiplayer

Where can I buy a Desert Child Key?

With GameGator, you are able to compare 17 deals across verified and trusted stores to find the cheapest Desert Child Key for a fair price. All stores currently listed have to undergo very specific testing to ensure that customer support, game deliveries, and the game keys themselves are of the highest quality. To sweeten the deal, we offer you specific discount codes, which you will not be able to find anywhere else. This allows us to beat all competitor prices and provide you with the cheapest, most trustworthy deals. If the current cheapest price of $0.42 for Desert Child is too high, create a price alert and we will alert you through email, SMS, or discord the moment the Desert Child price matches your budget.

Can I play Desert Child immediately after the purchase?

What store should I choose for the best Desert Child Deal?