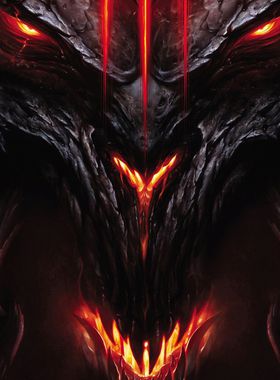 Diablo 3 is the ultimate action role-playing game and a worthy sequel to the Diablo series. Create your own hero from five different classes, each with its own set of spells and skills. As your hero experiences adventures in elaborate and varied locations, you follow the course of the epic storyline, and engage in battles with hordes of monsters and demanding bosses. Gain experience and additional abilities, as well as items of incredible power. The setting for the game is Sanctuary, a dark fantasy world. Most of its inhabitants are unaware that Sanctuary was saved from the demonic forces of the underworld by a handful of brave and powerful heroes twenty years ago. Most of these heroes, who faced eye to eye with the armies of the burning hells - and were fortunate enough to survive - had to pay for this experience with their minds. The game is a seamless sequel to Diablo II and offers an easy-to-use interface, fast-paced action, and the intuitive gameplay that Diablo players expect and value.

Where can I buy a Diablo 3 Key?

With GameGator, you are able to compare 6 deals across verified and trusted stores to find the cheapest Diablo 3 Key for a fair price. All stores currently listed have to undergo very specific testing to ensure that customer support, game deliveries, and the game keys themselves are of the highest quality. To sweeten the deal, we offer you specific discount codes, which you will not be able to find anywhere else. This allows us to beat all competitor prices and provide you with the cheapest, most trustworthy deals. If the current cheapest price of $13.29 for Diablo 3 is too high, create a price alert and we will alert you through email, SMS, or discord the moment the Diablo 3 price matches your budget.

Can I play Diablo 3 immediately after the purchase?

What store should I choose for the best Diablo 3 Deal?