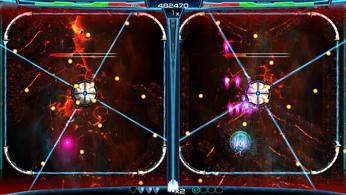 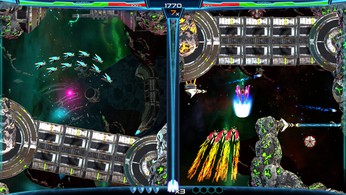 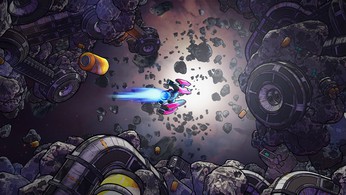 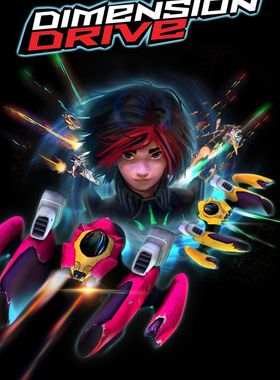 Dimension Drive is a space shooter that challenges your skills in entirely new ways. Play two games at once in this dual-battlefield madness set in a comic book universe!

Dimension Drive is a dual-battlefield space shooter with a teleportation mechanic. It seamlessly combines shooting and puzzle mechanics.

Dimension Drive will teleport you into a comic book styled sci-fi space opera set in a multidimensional universe.

The Ashajuls, a cruel multidimensional alien race, are attacking our universe. Fight as Jackelyne Tywood (a.k.a. Jack) in The Manticore, a legendary ship capable of teleporting across space and dimensions. Uncover the mysteries of your past and the origin of the Dimension Drives with your trusty friend and A.I., V.E.R.A., at your side.

A NEW TYPE OF SHOOT-'EM-UP

Dimension Drive is a dual-battlefield, vertical shoot-'em-up with a focus on smart, quick teleporting. Unlock several weapons by finding secret data cubes in the levels and improve your arsenal for the ultimate fight. Choose the best weapon for each level.

Unfold the secrets of the Dimension Drives and your past, teleport across the multiverse fighting the ultimate threat, and meet new races and allies!

A seamless combination of levels focussing on strategic shooting and real-time puzzles will make you question what you know about shoot-em-ups.

TWO GAMES ON YOUR SCREEN

Normal, Hard, Extreme and Insane offer different challenges for different play styles. Play with shields in Normal, or go to the old school route with one hit kills in Hard and Extreme. If you are up for the challenge try Insane and try your luck at beating the game without taking one single hit.

Finished the 13 levels of the campaign? Play the Mirror Dimension levels. Enjoy 13 extra levels in this New Game+ mode.

Play solo or enjoy our unique take on two-player mode: total co-operative where both players share everything down to their lives, play as a team or die.

Video game meets comic. Experience the story of Jack through the motion comics and awe at the colour rich in-game comic art style. Who said space was black?

The Manticore is powered by the Dimension Drive energy. Carefully strategise and decide when and where are the best places to teleport.

Obtain the best score in the leaderboards.

(We said that already, didnt we?)

Where can I buy a Dimension Drive Key?

With GameGator, you are able to compare 7 deals across verified and trusted stores to find the cheapest Dimension Drive Key for a fair price. All stores currently listed have to undergo very specific testing to ensure that customer support, game deliveries, and the game keys themselves are of the highest quality. To sweeten the deal, we offer you specific discount codes, which you will not be able to find anywhere else. This allows us to beat all competitor prices and provide you with the cheapest, most trustworthy deals. If the current cheapest price of $0.66 for Dimension Drive is too high, create a price alert and we will alert you through email, SMS, or discord the moment the Dimension Drive price matches your budget.

Can I play Dimension Drive immediately after the purchase?

What store should I choose for the best Dimension Drive Deal?