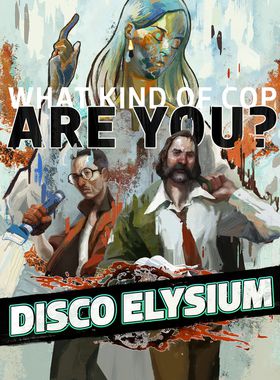 All editions The Final Cut

About Disco Elysium The Final Cut

At first glance, Disco Elysium is a classic CRPG committed to the tradition of pen-and-paper role-playing games. The isometric perspective and textures drawn with coarse strokes are a display of unparalleled art. The game combines the CRPG genre with elements from point-and-click adventures to create a game that is not just pretty to look at, but also packs a punch. You are transported into a parallel world of the 1980s into the metropolis of Revachol, which depicts something like an alternative post-war Berlin or a modern, extraterritorial Hanseatic city. After a failed communist revolution, an ultraliberal, capitalist trade union has taken over control. French, Finnish and Russian influences mix with the English of the texts and voice outputs of the game, giving the world of Elysium a very unique character. The gameplay takes place entirely in a neighbourhood comprising several blocks of houses in the Martinaise district. The latter is one of the poorest and most miserable spots in Revachol and it's the middle of winter. In this inhospitable environment, a nameless murder investigator wakes up from his party-induced hangover of hell.

Where can I buy a Disco Elysium The Final Cut Key?

With GameGator, you are able to compare 9 deals across verified and trusted stores to find the cheapest Disco Elysium Key for a fair price. All stores currently listed have to undergo very specific testing to ensure that customer support, game deliveries, and the game keys themselves are of the highest quality. To sweeten the deal, we offer you specific discount codes, which you will not be able to find anywhere else. This allows us to beat all competitor prices and provide you with the cheapest, most trustworthy deals. If the current cheapest price of $13.99 for Disco Elysium is too high, create a price alert and we will alert you through email, SMS, or discord the moment the Disco Elysium price matches your budget.

Can I play Disco Elysium The Final Cut immediately after the purchase?

What store should I choose for the best Disco Elysium The Final Cut Deal?

There are many details that you might want to go through before settling on the deal of your choosing. If you are looking for a special Edition, such as The Final Cut, you can select these in our menu. When it comes to the actual stores, we made sure that you will never get overcharged/neglected. As we care about your satisfaction, we like to ensure that all deals are legitimate, reliable, and foolproof. On top of that, we make sure all stores affiliated with us have proper refund processes and guarantees and are backed by a competent team to ensure that absolutely nothing will go wrong.